Trump Says: No Other President Has Done More to Improve US Relations with God 19 mins ago
ISIS Can’t Understand Why Sanders Hasn’t Praised It Yet 13 hours ago
Iran Offers Fresh Election Advice to Democrats Who Want to Get Rid of Bernie Sanders 23 hours ago
Jared Kushner Offers Sanders Campaign His Middle East Peace Plan 1 day ago
New York Times Defends Publishing Terrorist Op-ed: He’s no Bret Stephens 2 days ago
Palestinian Authority and Israel Offer Couples Therapy to Democrats and Republicans 2 days ago

Crank was born in 2007, but has an aging disorder which results in his more adult looks. However, the disorder affects only his looks so he is mentally an 8-year-old. While he has never had sexual contact with anything before, he has witnessed it.

A staunch supporter of animal rights, Crank donates to Militant Animal Voting Rights Anonymous. Crank was born with a full adult penis, but has always had an interest in global politics.

Crank is no longer interested in Pokémon. Living without a legitimate tongue, Crank struggles day to day with the idea of normalcy.

GAZA CITY – 56-year-old Palestinian Rafah Saleem al-Fayoumi stared forlornly at the funeral procession for his neighbor Hasan’s children, thinking to himself, “Why did Hamas leaders choose Hasan’s kids to be human shields against the evil Zionists instead of mine? Am I not good enough?” Turning to a sympathetic BBC reporter, al-Fayoumi then poured out his feelings: “Why is the blood of Hasan’s children somehow better than the blood of mine? It’s so unjust – Hasan’s family gets everything! Last week Hamas...

ISIS Recruit Thought He’d Be Drowning in Pussy by Now

19-year-old Hazem Talib assumed he’d be knee deep in warm apple pie after joining ISIS, but he has reportedly been very disappointed with the terror group’s weak poon game. “My cousins in ISIS, Mahir and Hamid, would tell me stories about getting crazy amounts of trim every single day, but I feel like I’ve been spending all my time just fending off mortar attacks and dodging airstrikes. I’ve barely gotten any action from the ladies at all,” Talib told reporters....

A local dad from Gary, Indiana named Doug Seaver is stoked to have found what he is reporting to be “the best deal in the history of the Internet.” He reportedly scored five tickets for a family cruise off the coast of Somalia, plus airfare, all for just $17.99. “When I saw this deal I was stunned. My wife asked if I’m buying tickets for our two teenage daughters and newborn baby and I was like ‘what do you think I’m an... 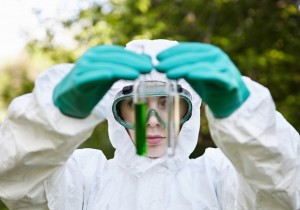 Gaza: We Will Donate Our Water to Flint, Michigan, Since No One Else Seems to Give a Damn

Finally, someone is taking action to help the residents of Flint, Michigan. Flint, which is made up primarily of underprivileged minority groups, has experienced a lead-tainted drinking water crises which has poisoned thousands of its citizens. While many American government authorities are still not doing enough to confront the problem, concerned citizens of Gaza have decided that enough is enough, and have taken it upon themselves to donate their scant water resources to Flint residents. “This crisis is a disgrace,”...

Trump: 'I Have Done More for America than George Washington' 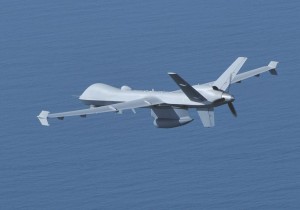 The United States Supreme Court has ruled that the Second Amendment of the Constitution protects the right of every American to own military combat drones. Following the ruling, many Americans expressed plans to fly their personal hellfire-dispensing machines over Iraq and Syria to help in the fight against ISIS. “We’re going to take the fight to those terrorist bastards,” said Chuck Mason, a citizen of Indiana, in a Facebook post celebrating the court’s decision. “They can keep their damn gihad... 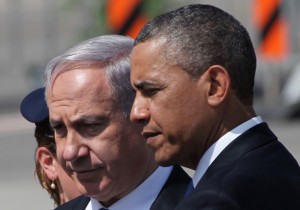 In yet another sign of their frosty relationship, U.S. President Barack Obama neglected to tag Israeli Prime Minister Benjamin Netanyahu in a group Facebook photo of world leaders at the recent United Nations General Assembly meeting in New York. Calling the incident “a grave insult to every Jew, Holocaust victim and democracy-loving fighter of global terror,” Netanyahu told the Sheldon Adelson-owned Israeli newspaper, Israel Hayom, that “Obama tagged every world leader except me – including genocidal Islamo-fascists like Iranian President Hassan... 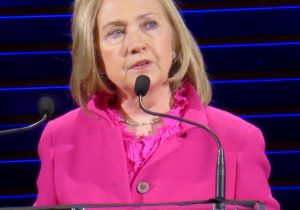 ALLENTOWN, PA – At a rally in America’s ‘Little Syria,’ Hillary Clinton once again reaffirmed her reputation for saying or doing absolutely anything to get elected. “I’ll never forget that harrowing day when we fled violence-plagued Chicago for the safety of the suburbs,” a teary-eyed Democratic U.S. Presidential frontrunner told the crowd ahead of the Keystone State’s Tuesday primary. “And the moment Daddy yelled at me to duck as a hail of bullets struck our automobile, ripping the head off my... 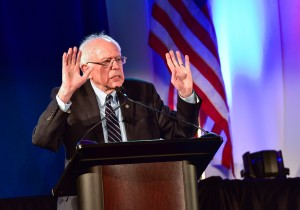 In a move that has outraged Jewish groups throughout the United States, the European Union has called for Democratic Presidential candidate Bernie Sanders to be clearly labelled as “Jewish.” “We feel that many voters are unaware of Bernie’s true identity,” one high-ranking EU official said yesterday in a statement. “Senator Sanders will have to wear a mark of some sort to signify that he is, in fact, Jewish,” the official continued. “It’s not that we’re being anti-Semitic, it’s just that we want... 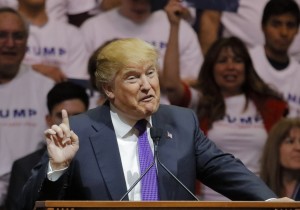 Trump: “Obama is Too Politically Correct to Kill Terrorists’ Families”

Citing President Obama’s adherence to international law when it comes to killing civilians, Donald Trump told the media that the president is overly controlled by “political correctness,” and that a President Trump would kill all families of suspected terrorists, presumably including the children. “International law?” Trump spat in response to a reporter’s question about the Geneva Conventions. “Do you think these savages care about international law? We’ve become so politically correct in this country that we can’t do anything, folks. I... 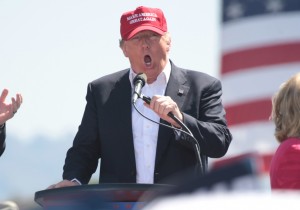 Speaking at a rally in upstate New York earlier today, Trump said that, unlike “our current ‘all-talk-no-action’ leaders,” his draconian policy was the only way to “once and for all eradicate this fifth column lurking in our midst.” Appropriating an Islamic legal term made infamous in the West when Iran called for the murder of novelist Salman Rushdie, the Republican frontrunner then said: “As President, the first thing I’ll do is sign a fatwa legalizing pre-emptive domestic strikes against those... 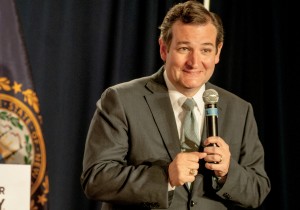 At a stump speech in Iowa yesterday, the robot known as Republican presidential candidate Ted Cruz reportedly got its wires crossed when it proclaimed to an audience that it “is not afraid to say ‘merry Christmas’ to Islamic Terror.” Cruz’s owners, Republican super-donors Charles and David Koch, told reporters that the machine must have mixed up its pre-set recordings. “It really only has four set topics it can talk about,” Charles Koch explained. “It has ‘Islamic terror’ mode, ‘War on... 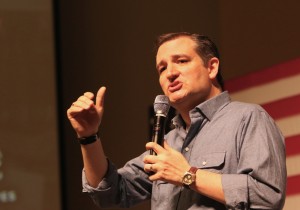 Republican presidential candidate Ted Cruz has repeatedly promised that if elected president of the United States, he would “carpet bomb ISIS’s capital city of Raqqa in Syria ‘till we see if sand can glow.” Undeterred by the fact that Raqqa is a city of hundreds of thousands of civilians, Cruz assured that unlike with Barack Obama, civilian casualties do not weigh on his conscience. “In fact,” Senator Cruz asserted, “I find carpet-bombing civilians to actually be quite fun and therapeutic.” Cruz...

Afik Levin, 13, should have been having the time of his life at his Bar Mitzvah party, yet instead the gravity of the barbaric Holocaust weighed heavily on his mind. According to witnesses, the Israeli teen was initially jubilant, gleefully estimating how much money his family and friends had given him, exclaiming, “there are so many people here! Between the checks and cash, I can’t believe how rich I now am!” However, guests then report overhearing a heartfelt conversation between Afik... 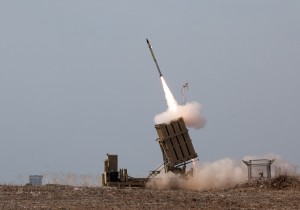 Trump: I Will Keep the U.S. Safe by Installing 19,354 Iron Dome Systems for Every City and Town

Citing Israel as a shining example of a country with strong national security and a ridonkulous military budget similar to the U.S., Donald Trump unveiled his strategy for protecting Americans from terror attacks. “Israel clearly knows what they’re doing. After all, they’ve been at war with Hamas for what, only 25 years now,” Trump told reporters. “Just look at their Iron Dome technology, which has prevented countless attacks on Israeli soil. My plan: as President I will install one Iron... 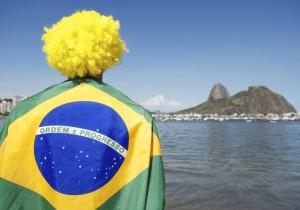 With the 2016 Summer Olympics just seven months away, a number of International Olympic Committee members are reportedly working behind the scenes to have the Rio Games relocated to the Islamic State’s capital, Raqqa. According to a Wall Street Journal report, the officials – including ex-FIFA President Sepp Blatter’s cousin – are claiming that Rio de Janeiro won’t be ready in time for the planned August 5 start, and that the city’s water pollution poses dire health hazards to athletes....

In response to calls for a more aggressive strategy to combat ISIS, President Obama, this week, gathered the courage to send an open letter to Islamic State leaders, demanding an apology for the terror and unrest they have caused. “I, Barack “Yes We Can” Obama, denounce your acts of terror and demand an immediate apology,” the letter read. “We, for our part, apologize for any harm we’ve caused you in the past, and we vow to immediately cease all airstrikes,...