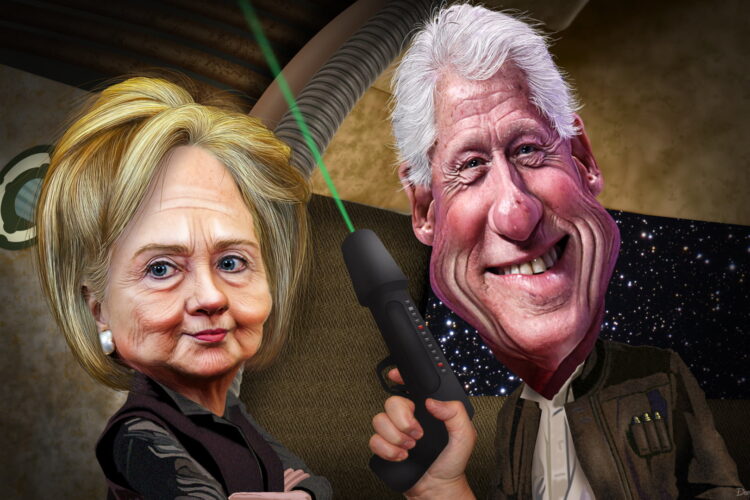 Image by DonkeyHotey via Flickr/https://www.flickr.com/photos/donkeyhotey/23731410293

“Crooked Hillary got her daddy to organize the hit [by religious extremist Yigal Amir] in order to boost the reputation of her rapist husband, Bighead Bill,” said the GOP presidential candidate. “And boy did he shine at Rabin’s funeral, with his nauseating ‘Shalom Haver’ eulogy televised around the globe.”

Citing an article from what he called the “respected Onion Herald,” Trump expanded on his conspiracy theory: “Bighead Bill hated the fact that Rabin was getting so much praise for his peacemaking efforts with the Palestinians – he was outraged, absolutely outraged, screaming, ‘Where the f**k is my Nobel Peace Prize, huh? After all, I was the one who orchestrated that historic White House lawn handshake!’”

Continued Trump: “So what did the Philandering President’s enabler-in-chief, do? Criminal Hillary ran to Mr. Rodham and pleaded, ‘Do something, Daddy – that Jew can’t be allowed to outshine my Billy boy!’”

In response, a clearly amused Hillary Clinton told CNN: “Trump forgot to add that it was my own grandfather who helped trigger World War One – by masterminding the assassination of Franz Ferdinand!”

“In all seriousness, however, Trump should have simply checked Wikipedia – my dad died in April 1993, more than a year and a half before Rabin was murdered,” said Clinton. “But such is the world according to Deranged Donald,” who the Democratic frontrunner then vowed to “assassinate electorally on November 8” (which, incidentally, is just four days after the anniversary of Rabin’s murder).