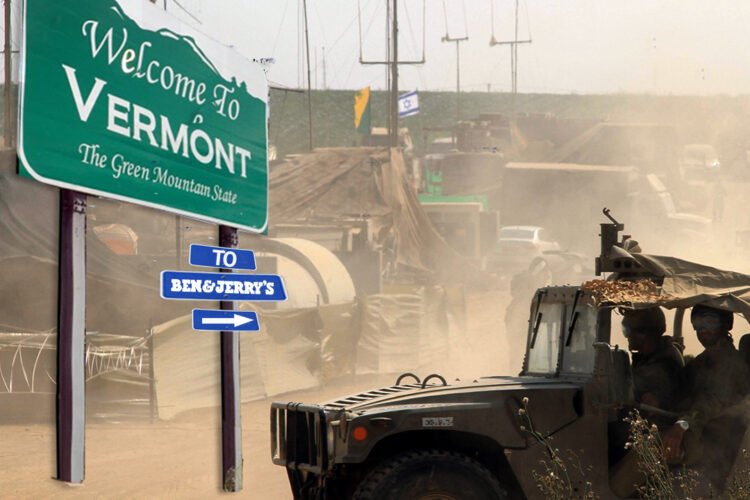 Calling it a fitting response to an act of unprovoked aggression, Israeli forces have entered Vermont and are pushing towards the capital of Montpelier.

The invasion comes days after Ben & Jerry’s, a Unilever-owned ice cream company based in Burlington, announced that it would no longer sell its products in the West Bank and East Jerusalem.

“I was not bluffing when I promised that this act of aggression by Ben and Jerry would have serious consequences,” Israeli Prime Minister Naftali Bennett told The Mideast Beast. “Our forces will not leave Vermont until Ben, Jerry and all other Vermontinians accept the legitimacy of the Jewish state.”

While IDF officials portrayed the invasion as a defensive move aimed at preventing further attacks, the government has begun settling Israelis in eastern Vermont. Israeli officials said that they are prepared to negotiate a peace treaty with the northeastern US state, as long as Governor Phil Scott is open to mutually agreed upon land swaps.

“We cannot return to the pre-2021 borders, where Israelis lived in fear of attack from radical Vermontinian terrorists,” Foreign Minister Yair Lapid tweeted. “It is the Vermontinians who are the obstacles to peace.”