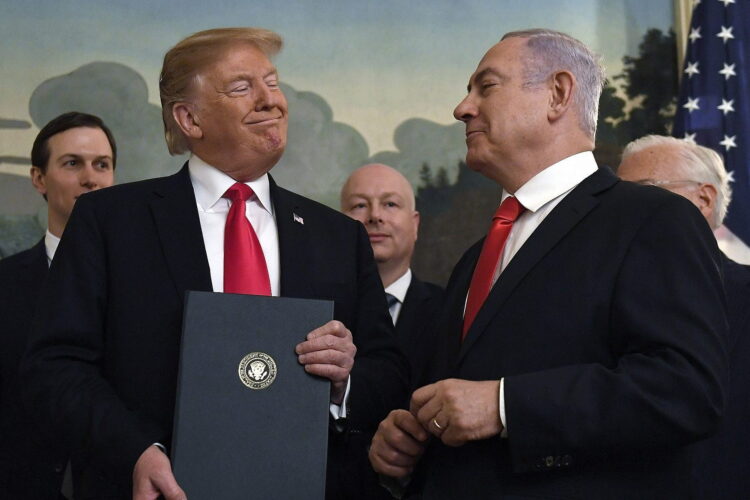 Image from The Times of Israel in “Before election, PM aims for Trump backing for Israel sovereignty at settlements” at https://bit.ly/2vHKTVT

Israeli Prime Minister Donald Trump claims to have achieved “the “biggest win of my life” in the Israeli election, despite failing to secure a winning margin in order to form a viable majority government. He appointed an unknown bureaucrat Bibi Netanyahu as his anti-corruption speechwriter and Middle East Director of Annexation.

“Today marks a new approach to the conflict between Republicans and Democrats. It’s time to officially recognize Mar-a-Lago as America’s ancestral capital. It’s the unofficial residence of the sesquipedalian and undisputed expert US President. Generations of Americans have concluded Thanksgiving with the pledge ‘Next year in Mar-a-Lago.’ I am therefore moving the Israeli embassy, from the insufferable undrained DC swamp, to Mar-a-Lago.”

Liberal political commentators lamented Trump’s victory as the “final death knell to the two-state solution of a PLO state and Hamas state peacefully strangling each other, side by side.” By contrast, conservative commentators cheered Trump’s victory, stating, “Israel finally got its first Prime Minister with balls since Golda Meir.”

Trump commented on his Israeli election “victory” and US-Israeli relations.

“Unfortunately, racist Israelis prefer a sexist bigot over a multiracial-aspiring post-Jewish 78-year old millennial socialist dreamer. Instead of embracing my free Gulag housing, Israel was seduced to the Dark side, led by a foul-mouthed Twitter addict”.