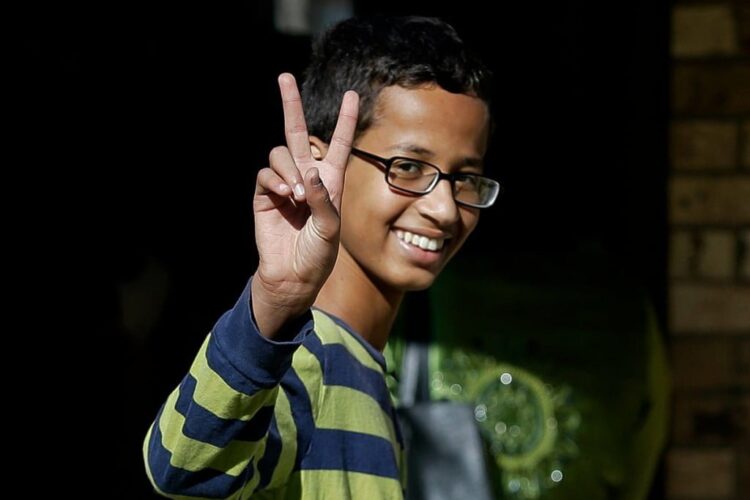 Ahmed Mohamed image, courtesy of and sole property of ThinkProgress at http://bit.ly/1PIb515, 18 September 2015

In the wake of his arrest, Ahmed Mohamed, a Texas teen taken into custody for bringing a homemade clock to school, has received an abundance of public support. The support ranged from donations of various computers and gadgets, as well as more prestigious invitations. Google co-Founder Sergey Brin has already met the lad and Facebook CEO Mark Zuckerberg offered to meet with the boy, whose gadget was mistaken for a potential suitcase bomb, and reports have said that he may have an internship at the company. President Obama also issued an invitation to Mohamed, which has convinced crazies everywhere, that he is indeed, a Muslim after all.

But, more recently, the Texas teen-tech-wiz has been offered a one-way trip to the battlefields of Iraq and Syria by ISIS, the douchiest bunch of douchebags in the douchebag capital of the world. A copy of the invitation was provided to the press and reads,

First of all, we’d like to say, we’re big fans. Your suitcase bomb, despite not working and not killing any infidels, really caught our attention. Like Comrade Obama, we’d like to offer you an invitation to come here, and start an internship at ISIS rather than Facebook. We don’t have health or dental, so don’t expect any benefits. Please bring your “clock,” and plans for more.

Praise Allah and Death to America,

Ahmed was apparently very confused by the invitation, and would much rather work for Facebook, though an internship at the White House is not out of the question, at least not until January 2017.