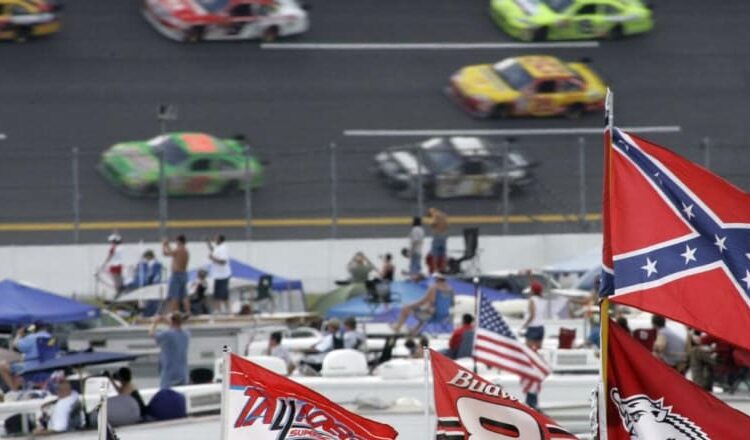 Image from Shepparton News in "NASCAR bans Confederate flag at races" at https://bit.ly/2XV2bKy

Starting tomorrow NASCAR drivers will no longer be allowed to wear the white pointed hoods of the Ku-Klux-Klan to work. The decision was announced yesterday by the racing company’s CEO Jim France.

The ban comes amidst a moment of reckoning over racism and white supremacy in the United States, and has upset many NASCAR fans and drivers.

Jason Beans, a leading motorsport helmet designer, said banning KKK-wear is an attack on his culture, “it’s bullshit. This is the only sport where white Americans are still a factor and they won’t let us wave our flags here.”

NASCAR’s mostly white southern base has a long tradition of bringing symbols of hate to the racetrack. While the symbolic KKK ban has been celebrated, many worry that the vacuum of hate-symbols will be quickly filled.

“I expect swastika caps and armbands to replace the KKK hoods immediately,” said Daniel Goldberg, the only Jew The Mideast Beast could find who follows NASCAR.

Goldberg added that he thinks the league only ditched the KKK hoods because of the political moment and the pressure to crack down on anti-black racism. He predicts that going forward NASCAR will pretend to champion diversity while finding a way to promote hate. “I think that with Nazi signs at the racetracks the league should be able to recruit Ice Cube as a new ambassador and token black supporter, I fully expect to see some Nazi salutes in upcoming NASCAR races.”