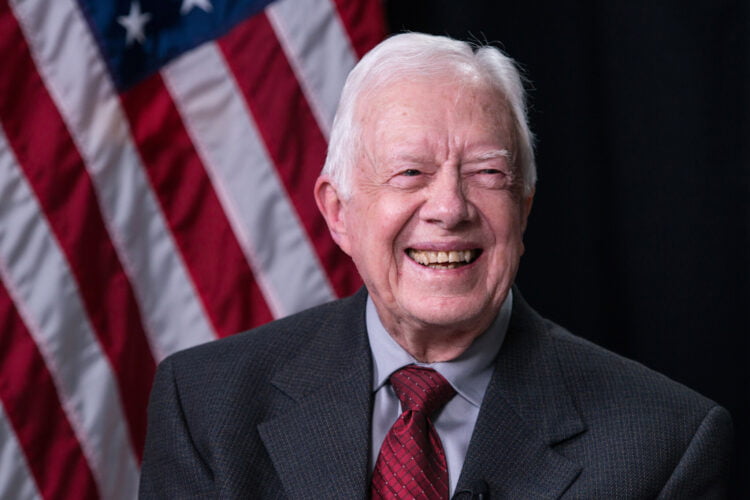 The Islamic State scored a coup today when the former president, formerly known as Jimmy Carter, held a press conference in Syria and pledged allegiance to ISIS.  “Ever since people made the mistake of voting me out of office, I just haven’t been all that sold on America,” explained Carter, who now insists on being addressed by his “Islamic name,” Ali ibn Nudnick.  “I may be 90, but that’s not too old to change.  Besides, in ISIS, I’ve found good folks who share my values. Allahu Akbar!”

Not all ISIS members were enthusiastic about their latest recruit.  “Ibn Nudnick seems like a nice old guy, but he’s always droning on about settling the Panama Canal crisis and appointing Paul Volker, and ‘I’d have won if it weren’t for the Jews.’  And I’m like, dude, I just beheaded this guy and want to enjoy his daughter who’s now my newest sex slave. Tone it down, I’m trying to concentrate here…”

Carter however told The Israeli Daily that he’s beloved by his new comrades. “I just walk up to the fellas as they’re torturing some infidel or planning some new bit of savagery and they’re always like ‘thank God! Nudnick’s here.’ I can’t recall ever being so wanted since I left office. Hamas and North Korean officials never treated me like this.”

In a surprising twist, the White House is apparently not particularly bothered by the former President’s defection. As a White House spokesperson explained, “it was almost two months before we even realized Carter was gone. And the old guy’s a pain in the ass; always criticizing Obama or calling Obama and saying, ‘you know sonny, back in my day.’ He’s like John McCain but without the power or the propensity to call his wife a ‘cunt’.” The source further explained that, while the ex-president wouldn’t be specifically targeted in any air strikes, “we may have to prepare for a ‘hey, accidents happen’ statement.”