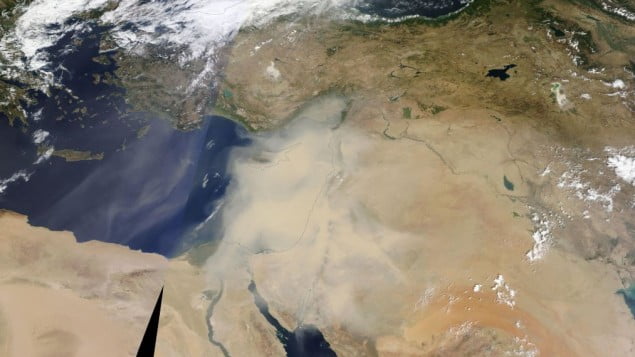 Sandstorm covering Israel and much of the Middle East. Image credit to The Times of Israel at http://bit.ly/1ibdzdF

With the number of casualties and refugees created by the Syrian civil war continuing to grow, Israeli-Palestinian tensions beginning to boil over, and the spread of ISIS through the region, it’s no wonder that God just couldn’t stand to look at the Middle East anymore. It was as a result of all this violence and strife that the Creator decided to push his version of the mute button- a massive dust storm blocking the region from view. After intense prayer and many hours of introspection, The Mideast Beast was able to communicate successfully with the Almighty in order to get his perspective on the storm that was visible from space. “Well that was the point, wasn’t it?” He said, “From where I live – you know, in space – only the storm was visible. For a brief, glorious moment, I couldn’t see all the bloodshed and hatred.”

Following our shock that God’s voice sounds like if Morgan Freeman and Neil DeGrasse Tyson had a baby, we pressed Him about how much was really blocked from His omniscience. “Good question! I knew I gave you guys at The Mideast Beast an extra helping of brains for a reason! But you’ll recall that I’m also omnipotent, so I can make a dust storm so powerful that even I can’t see or hear what’s on the other side. And that’s exactly what I did.” This answer is cause for significant introspection, and caused us to ponder deeply how we treat our fellow man in spite of what we believe God wants. We then proceeded to ask for three wishes but were informed that, no, God is not a friggin genie in a bottle.