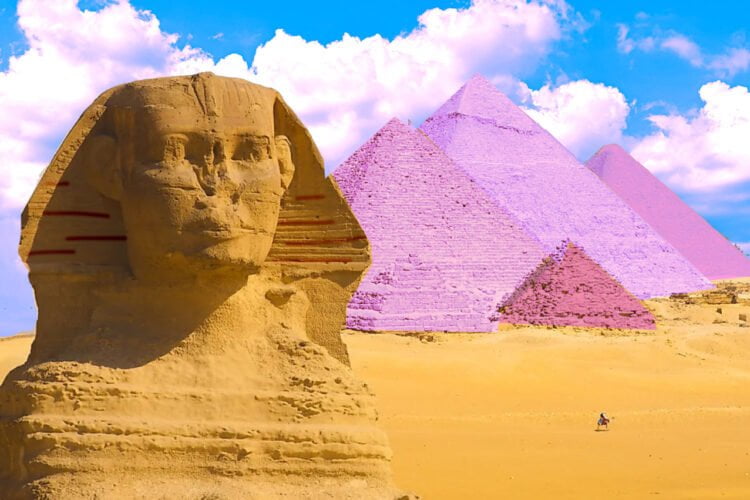 CAIRO –Thousands of Egyptian locals and foreign tourists awoke to a startling sight on Wednesday: the pyramids of Giza, the only surviving marvel of the Seven Ancient Wonders of the World, had been pinkwashed overnight. While many were at first convinced that the peculiar color was merely a reflection of the desert sunrise, it soon became clear that the ancient structures, built over 4,500 years ago, had been vandalized.

At midday Cairo time, an obscure group calling itself the Homorabian Liberation Front (HLF) claimed responsibility, warning in a video uploaded to YouTube that similar stunts were planned. “Nothing will be safe – not the Sphinx, the Burj Khalifa, the Al-Aqsa Mosque or even the Kaaba in Mecca – until the pharaohs of the region cease their terrorist campaign against us LGBTQI+ Arabs.” Same-sex relations are illegal across much of the region, with those accused often subject to imprisonment, torture and even execution.

Egypt’s antiquities minister, Mahmud Al-Humafobbi, was quick to denounce the HLF’s actions: “Not only are the degenerates intent on destroying Egyptian morality, but also our proud history.” UNESCO also issued a stinging condemnation, saying, “while we of course support full equality for LGBT people in the Middle East, desecrating millennia-old treasures is not the way to go about it.”

The HLF activists, who appear in the YouTube clip wearing pink balaclavas, said it took four teams of twelve people roughly four hours to climb the main 139-meter-tall pyramid and pinkwash it using customized spray hoses. In response to accusations of vandalism and growing outrage in the international archeological community, the group clarified that it “used a specially-designed temporary paint that evaporates after a few days under intense sunlight. So chill the fuck out and enjoy the fabulous sight.”