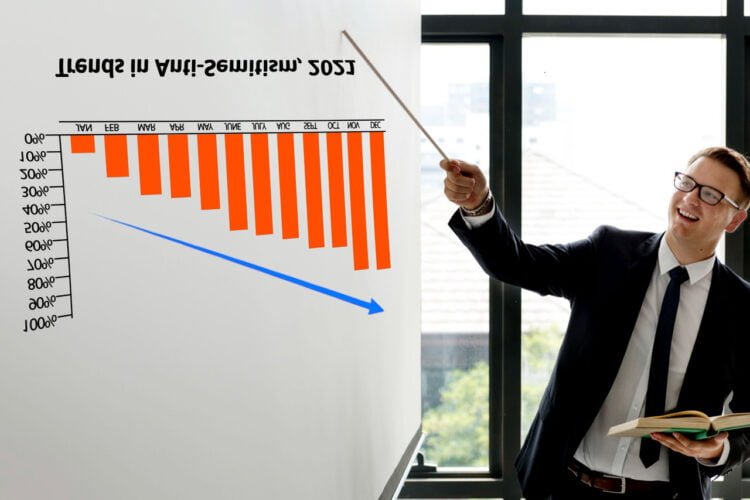 Amid fears that anti-Semitism is beginning to rear its ugly head on the once fertile, Jew-hating soil of Europe, an exodus off the continent has begun.  Jews are starting to treat Europe like a bagel shop that ran out of lox, with more and more leaving every year.  Many theories have been put forward as to why this migration is starting to take off, though most people cite increased anti-Semitic incidents.  But it seems that European authorities have a different view, and say that anti-Semitism can’t be the root cause – not because anti-Semitism hasn’t increased, but because it has actually decreased.

RELATED: Al Jazeera America to Shut Down, Citing “Not Enough Anti-Semites in U.S.”

“You see,” says French Police Chief Pepe Lepew, holding a chart in his hands, “you’re holding the chart showing the number of anti-Semitic incidents like this [Lepew holds the chart normally], when you should be looking at it like this [Lepew flips the chart upside-down].”  The result of this Hillary Clinton-level flip-flop is that the chart’s anti-Jewish mountain has become a deep Jew-loving valley.  Chief Lepew insisted to TMB reporters that this was the proper way to read the chart despite our objections that the axes and labeling were clearly upside-down.  “Statistics aren’t science – like building a rocket, “responded Lepew, “they’re art- like painting a rocket.  Look, I can hold this paper at all different angles, all resulting in different anti-Jewish trends.  Actually… now that I think about it, if I hold the chart like this [flips chart around to the blank side], then we don’t have any idea how Jews are being treated!  See? Problem solved!”