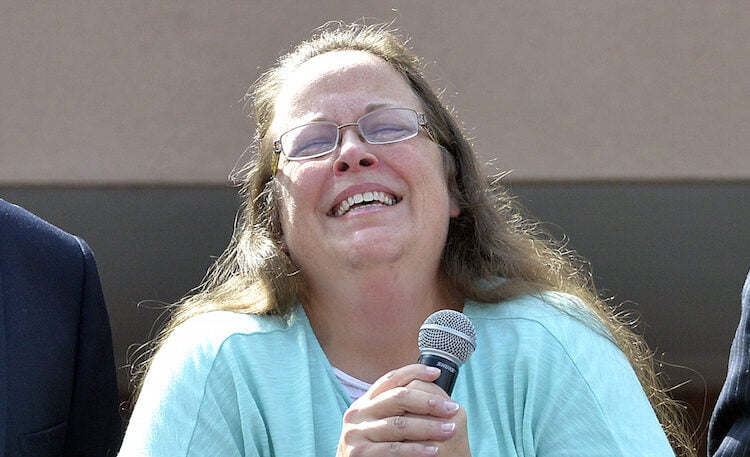 Kim Davis upon release. Courtesy of and property of Gawker; found in http://bit.ly/1MafEQH September 9, 2015

Calling it a huge victory for religious freedom across the globe, Christians in Iraq, Syria and several other Middle Eastern countries took to the streets last week to celebrate Kentucky county clerk Kim Davis’ release from prison.

“It’s been hard to enjoy our freedom here knowing that in America Mrs. Davis is behind bars just for being a Christian,” said one Christian Baghdad resident. “Sometimes we take for granted that in Iraq we are free to practice our faith openly, as long as we do it by harassing homosexuals.”

After Mrs. Davis was jailed on 3 September for refusing to issue marriage certificates to same-sex couples in Rowan County, Kentucky, Christians in ISIS-held Raqqa, Syria held a series of protests, rallies and hunger strikes in support of the beleaguered clerk.

“Us Christians have it pretty good here under the Islamic Caliph, as long as we never show our faces in public and don’t forget to pay our jizyah,” said one Raqqa resident, referring to a tax levied on non-Muslims. “It makes you forget that Christians face all kinds of oppression in other parts of the world, like Kentucky.”

When Mrs. Davis was finally released last Tuesday, Christians across the Middle East rushed the streets in celebration. For some, however, the fight for freedom in America is far from over.

“Mrs. Davis’ liberation was a joyous occasion for all of us,” a Christian woman in Cairo, Egypt told The Mideast Beast. “However, we won’t stop fighting on behalf of America’s Christians until President Obama finally ends his war on Christmas.”