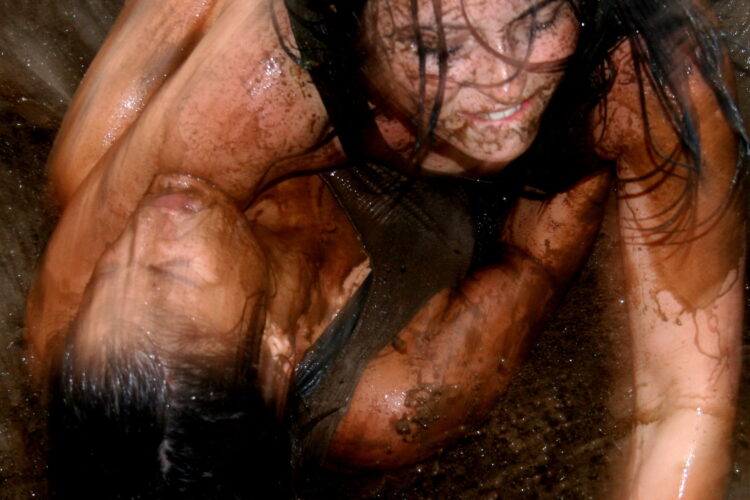 “With this landmark decision, we’ll once and for all prove that Lebanese – not Israeli – mashed chickpeas and bikini-clad chicks are the tastiest in the region,” said Abdul Muttalib Hinnawi at Beirut’s National Hummusdome (formerly the Roman Hippodrome). “And contrary to the lies of the colonialist Zionist propaganda machine, the Jews were still eating slimy Gefilte fish – and fellating Russian donkeys – when our sun loving foremothers invented hummus as a novel form of UV protection for their shaven punanis.”

After concluding the press conference, Hinnawi swapped his suit for a referee’s uniform before welcoming Lebanon’s premier lesbian wrestlers, The Emashculator and Madame Muffdozer (AKA the ClitPee), into the ring for a brutal, globally televised demonstration match.

Nineteen nail-biting, nipple-twisting, labia-bruising rounds of naked wrestling in knee-deep hummus ensued before the Muffdozer finally subdued her opponent through a masterfully executed Diving Fist Drop–Anaconda Vice choke combo. The 60,000-strong crowd then erupted in ecstasy as the victorious Muffdozer, after first being licked clean by the Emashculator, pounded her vanquished opponent with a baseball bat-size strap-on carved from Lebanon’s famed Cedar wood (though not before Hinnawi mercifully lubricated it with olive oil and tahini, the cuntry’s second favorite dip.)

Despite the euphoric scenes at the Hummusdome, a war of words rapidly broke out between rival factions of Lebanon’s lesbian community – which, like the rest of the country, is deeply split along sectarian lines. While the secularist Lebanese Association of Banana-Idolatrizing Athletic Coochmeisters (LABIAC) – representing over 200,000 Sunni, Christian and Druze lesbians – hailed the announcement as “a timely recognition of our vaunted position atop the apex of Lebanese high culture,” the Orgynization of Femo-Islamist Shi’ite Tongue Terrorists (ORAFIST) denounced it as “a puerile publicity stunt smeared with countless tons of muff-mocking misogyny.”

Meanwhile, Israel’s Minister of Culture and Sport, hardliner Miri Regev, took to Twitter to challenge Madame Muffdozer to a showdown in Jerusalem: “Bring it on, sharmuta – I’ll show you just whose #nationalspread is creamiest, dirtiest and deadliest!”