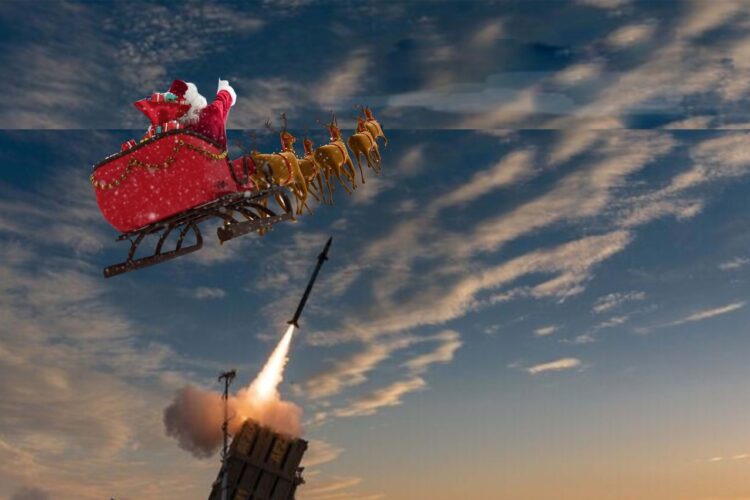 A detection error by Iron Dome, Israel’s missile defense system, took out one of Santa’s reindeer and threatened to derail Christmas Friday night.

Saint Nick was flying from Lebanon into northern Israel, where he was set to deliver toys to Christian children in and around Nazareth. When the Iron Dome detected a suspicious group of objects flying low in the sky, the sleigh was misidentified as a rocket barrage. An Iron Dome battery was deployed, with the interceptor killing Blitzen and injuring Comet and Vixen.

Claus was able to safely land his sleigh outside Jerusalem and later in the night took off again and finished his route. But he was delayed for hours, and several families ran into him in their living rooms when they woke up Christmas morning.

The Israeli government acknowledged the error but blamed Santa for the unauthorized use of its sovereign air space.

“If Mr. Nicholas wants to enter the country, he can go through the checkpoints like everyone else,” explained Israeli Prime Minister Naftali Bennett. “Not that we really want him – after all, he is from Turkey, so he probably supports Hamas.”

“I’m out here bringing joy and peace to the Earth, and these Jews are trying to kill me!” a rattled Claus told reporters shortly after the incident. “Gosh, now I know how Jesus felt.”