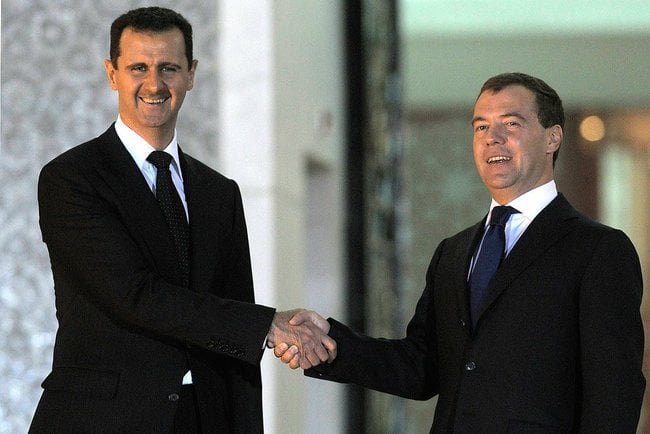 The Syrian President with some Russian guy, by Kremlin.ru [CC BY 3.0], via Wikimedia Commons

Syrian President Bashar al-Assad announced that he will resign from his position after it was discovered that he had been using a private e-mail account to conduct government business, leading opponents and supporters alike to question whether Assad is trustworthy. As of recent, he is the second high-profile individual to face this accusation.

“While I was bothered by Mr. Assad’s cluster-bombing of Sunni villages and use of chemical weapons, the e-mail thing is a real deal breaker,” explained one former Assad supporter. “How could the president take government protocol so lightly?”

RELATED: Assad Admits he ‘Overcompensates’ for his Father’s Belief that He’d Never Amount to Much of a Mass Murderer

Opponents noted that sensitive subjects such as torture, ethnic cleansing, and barrel-bombing may have been discussed over non-secure e-mails.

“If his rejection of the 7th century caliphs Abu Bakr, Umar and Uthman and his refusal to exterminate the Christians wasn’t enough, Assad’s decision to send classified e-mails on a private account prove that he cannot be trusted,” explained Abu Mohammad al-Julani, the leader of the opposition group al-Nusra Front.

As of press time, Russian President Vladimir Putin was reportedly frantically trying to make sure pictures exchanged between him and Assad over e-mail would not be made public.