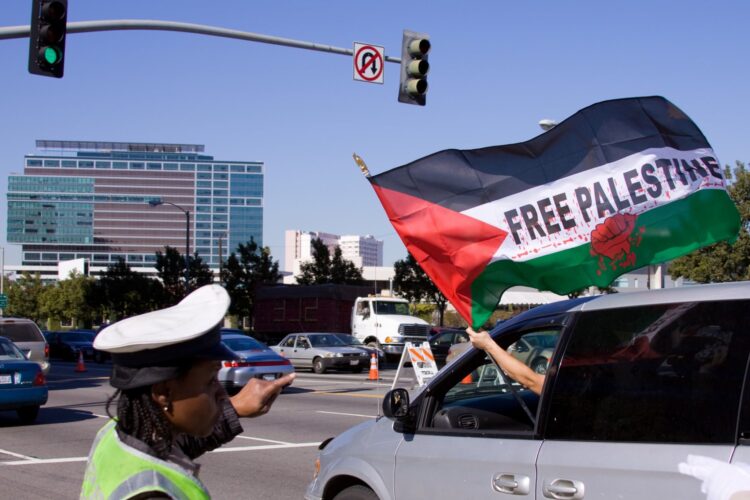 The UC Irvine chapter of Students for Justice in Palestine (SJP) disrupted a showing of the Israeli film “Beneath the Helmet” by yelling obscenities, physically blocking students, and attempting to force their way into the room where the event was being held.

When asked for comment, SJP President Celine Qussiny expressed pride over how the organization peacefully physically intimidated the participating students. She also maintained there is nothing wrong with the situation escalated to the point where police had to escort fearful Jewish attendees. “I think it’s great! Including law enforcement increases the diversity of the people involved in this Middle East debate and ushers in fresh ideas and discussion.”

She also wanted to make very clear that the organization differentiates between the Zionists they target and the Jewish students. “We don’t accept anti-Semitism, but we are indeed anti-Zionists. If it was up to me I would eliminate all the Zionists from campus. Although Zionists are mostly Jews, so odds are if you’re a Jew there is a good chance you are a Zionist. We only rough-up these coupon herders because we want to end the Israeli occupation. Anyway, what was the question again?”

The UC Irvine Administration condemned the situation and released a statement describing different ways students could help de-escalate the situation. “Clearly, this is a cause for concern and the administration has recommendations for students in addressing this conflict. Instead of saying ‘Israel’ we request students say ‘Contested Occupied Territories’, and rather than referring to an intifada as a ‘Holy war’ please use something a little more friendly like a ‘conflict resolution tactic’.”

Other recommendations on the list included for students to “look less Jew-y” and “being inclusive and open to integrating rockets into Israeli society.”