Trump on Eid Dinner: “I’m Only Going If There’s Ketchup” 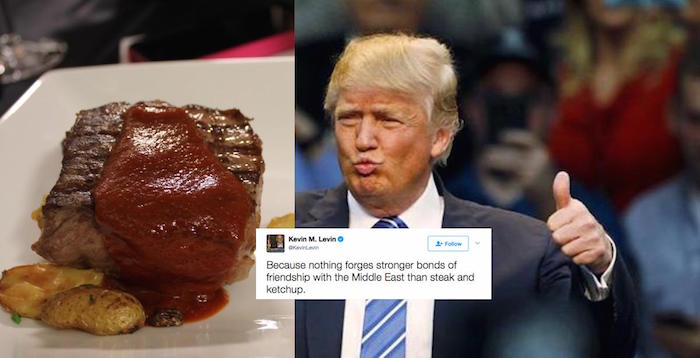 Image from The Daily Buzz at http://bit.ly/2tLPwIF in “Trump Will Be Comforted With Steak And Ketchup During His First International Trip”

President Trump has broken a 20-year tradition by not hosting a White House Eid dinner this year. A spokesman for the president confirmed that the decision was taken after it was noted that there are no Middle Eastern dishes that can be enhanced by ketchup.

“We looked at everything that was on offer and it became clear that the presidential desire to add his favorite tomato based condiment to everything, was not going to work in this case. It’s true that technically you can dip grilled halloumi and even falafel in ketchup, but it was going to cause several eyebrows to be raised. And with the current tension levels in the region, it was decided that the risk was simply too great.”

Middle Eastern good critic, Aaban Nouri commented, “The man doesn’t like hummus. Everyone loves hummus. What sort of monster is he?”