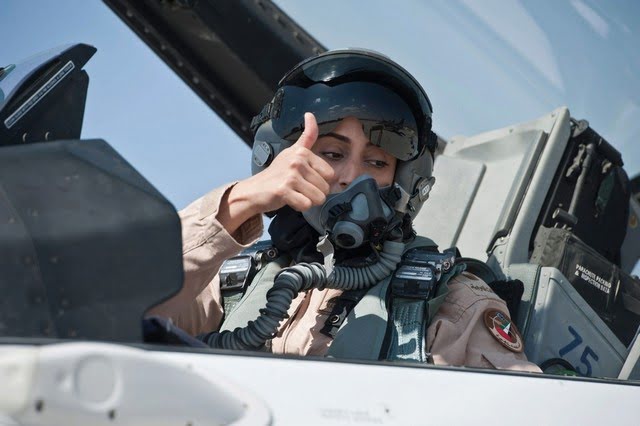 Foxy UAE pilot, courtesy of and sole property of The National. Found at http://bit.ly/1l6WBe7

Remember the UAE Arab-Muslim female fighter pilot and her F-16 Fighting Falcon that blasted ISIS members to Never-Never Land? Well, media outlets around the world were joined in collective relief that the UAE fighter pilot, Major Mariam al-Mansouri is very ‘easy on the eye’.

Middle East Editor for the New York Times Peter Johnson said, “let’s be honest recent developments in the region have been both depressing and complicated. Even liberal use of pictograms has not helped as much as we had hoped. Luckily we can now just shove a picture of Miss al-Mansouri on our front page and no one bothers to read all the complicated stuff we put ‘underneath the fold’.

RELATED: This might be more complicated than we thought,’ admits everyone

Casual absorber of world news Jim Jacobs, agreed, “I really had lost interest in this whole mess the minute it required me to try to comprehend there were more than two sides, or ‘goodies and badies’ as I like to think of them. But now I’ve got a hot exotic chick to gaze at. I can explore with my male friends at work a rich stream of discussion about how it’s good that she can handle lots of thrust.”

The view from the receiving end has been more nuanced. One ISIS fighter spoke for many, “obviously, women, so bad. However there’s been a lot of discussion around the campfires that she does seem a lot more interesting than all the virgins we keep hearing about. Do you think she’s seeing anyone?”

The Major refused to comment on her relationship status but she did promise to send them signed photos as long as they promised to all group together in a field and stay very, very still.