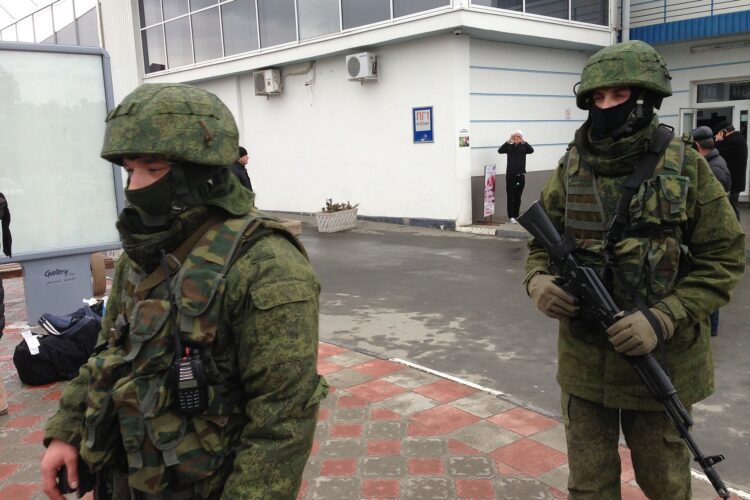 'Unidentified' troops in Ukraine (wonder who those pasty white boys are) By Elizabeth Arrott / VOA [Public domain], via Wikimedia Commons

After months of confining its Middle East strategy to trolling Obama on Twitter, the Russian Armed Forces have fully engaged in Syria in October with a bombing campaign and a deployment of ground troops. The shift in Russian tactics has left Western analysts flabbergasted, prompting NATO to request The Mideast Beast to investigate the issue.

“It’s October now so it’s getting pretty cold in Eastern Ukraine, not that any Russian soldiers have been in Ukraine recently of course”, clarified Colonel Sergey Alkashev of the Russian maritime base in Latakia, Syria. “Here on the Mediteranean coast it’s nice and warm. We planned on going to Israel’s southern resort Eilat but the hotels are too expensive there. Then we thought about vacationing in Greece but they wouldn’t allow us to bomb anyone in the area. How else are my boys supposed to blow off steam and relax before going back to the Ukrainian trenches?” Sergey quickly added: ”Not that they’re going there or anything of course.”

“We can’t deny that we don’t have intelligence contradicting the claim that Syria isn’t trying to secede from the Ukraine, but we must not dismiss that possibly failing to happen either”, explained Sergey’s aide, Major Razkumarov. “By the way, did you bring over the crate of Stolichnaya I asked for from Tel Aviv? My brigade is sick of the swill they pass for vodka in the Ukraine, not that we were ever there to find out of course. And not that we drink either.”

“Hold up, ISIS? Who’s ISIS? Never heard of no ISIS. They do what to heads??” Sergey shouted after we left.