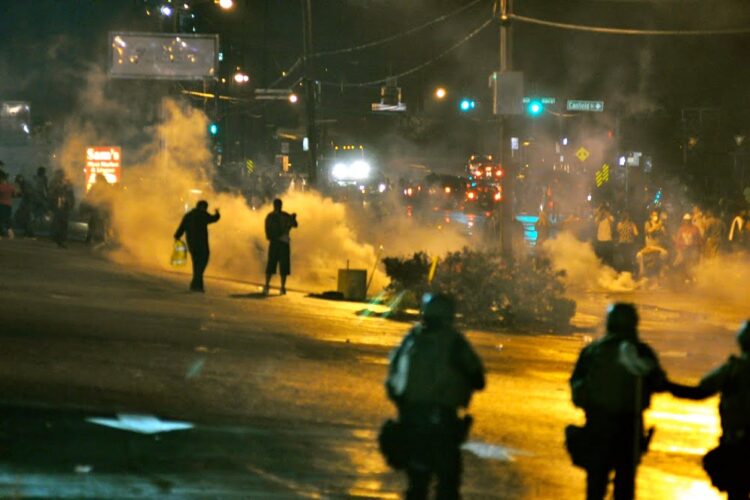 By Loavesofbread (Own work) [CC-BY-SA-4.0, via Wikimedia Commons

A rumored Snowden leak details the Ferguson Police Department’s inability to actually carry out the whole policing thing, and points out that they are drawing tactical inspiration from ISIS to handle the situation because “they just can’t deal.”

Speaking to The Mideast Beast’s Chris Peacock, the Ferguson Chief of Police stated, “This just got out of hand really quickly; one moment we were carrying out low level racial profiling, the next we’re knee deep in a ‘Southern Fried Intifada’.

The alleged classified leak details the police’s lack of a tactical policy coupled with a ‘gun-happy’ attitude to life, apparently inspired by ISIS, a group with whom the CIA and Mossad has reportedly been in regular contact, at least according to bands of tinfoil-hat wearers. The Mideast Beast research team, headed by Rani Steelballs, has revealed that there are indeed similarities between ISIS and Ferguson policing tactics. “They are very easy to spot. They both gun down and/or gas those whom they simply do not like (armed or unarmed), resulting in mass demonstrations, which both ISIS and Ferguson police are also inclined to gun down or gas. Decapitations, however, are currently reserved solely for ISIS because, well, “it’s an ISIS thing.”

Recent CNN footage displayed a placard during a live interview, reading the words “ISIS here” which may prove to be evidence that ISIS plays a role in the Ferguson fiasco. The ISIS placard may also point to other unconfirmed reports about the next Snowden leak: there may be a link between ISIS and the recent Ebola outbreak. One NSA analyst noted, “We have absolutely no idea if this is true or not but given ISIS’ desire to kill anyone that doesn’t look like them, would anyone really be surprised?”  In related news Fox News’ excitable Sean Hannity and bunny-boiling MILF Ann Coulter are teaming up to expose Obamas’ longstanding brunch invitation with ISIS .