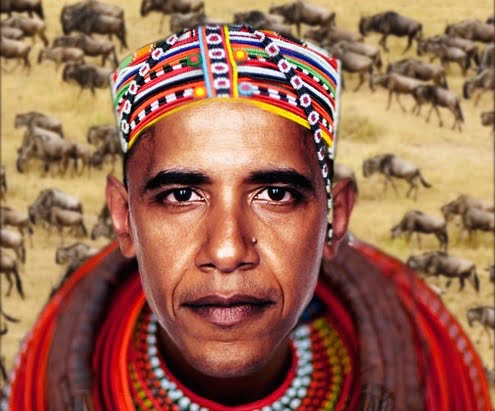 With just over a year left of his second term, U.S. President Barack Obama is planning to contest the next Kenyan presidential election, according to a controversial FOX News report.

Citing what it claims are well-placed White House sources and leaked extracts of his draft presidential memoir, the 12-minute “Exposed: Obama’s Blackprint for World Domination” levels multiple allegations against the U.S. president, going so far as to outline his alleged “multi-stage plan for enslaving the world’s Caucasian population.”

At first, Obama’s purported bid for Kenya’s top job is attributed to an intense grudge against current Kenyan President Uhuru Kenyatta, who apparently called the U.S. president an “Oreo” in a meeting with fellow African leaders. “I’ll show that bastard just how big and black my balls are,” a furious Obama reportedly told an aide after hearing of the slur.

Other factors allegedly influencing Obama Jr.’s planned run are Kenya’s warm climate and spectacular wildlife, as well as its relative proximity to Mecca, where Obama purportedly intends to perform the yearly Hajj after converting “back” to Islam.

Sheer hatred for America, the report suggests, is also a driving factor: “Running this country has reaffirmed my fundamental belief in its inherent racism, stupidity and selfishness. One day soon, enshallah, I will leave its pasty ass capitalist shores behind forever,” reads one section from what Fox News claims are leaked extracts of Obama’s draft memoir, entitled “Damn you, America: Inside My Mission to Bolshevize the White House.”

Yet it’s in the second part of the report where Obama’s grandest designs are ostensibly revealed: using the Kenyan presidency as a springboard to the African Union chairmanship, from where he aims to federate the 70-plus states of both Africa and the Middle East.

As the president of the world’s largest and most populous country, the United States of Islamic Socialism, Obama allegedly plans to harness the new superpower’s vast resources, as well as his intimate knowledge of America’s deepest trade and defense secrets, to implement his ‘Browning of the World’ master plan.

The report then cuts to a dramatized scene of thousands of shackled white Americans being packed into cargo planes at Chicago’s O’Hare Airport, destined for lives of slave labor in Dubai-like metropolises rising across Obama-ruled Africa.

At a White House press briefing, Obama slammed the report’s accuracy: “The folks over at FOX News omitted a crucial phase in my master plan: Michelle 2016. Once my wife beats Hillary in the primaries and outguns the eventual GOP candidate, not only are we going to radically expand welfare, fully socialize healthcare and totally abandon Israel, but we’ll dismantle America’s nuclear arsenal and sign an open border agreement with Mexico,” the U.S. president told reporters. “Only then, after 16 years of unbroken Obama rule – once America is thoroughly bankrupt, defenseless and Caucasian-minority – will we move to Nairobi.”