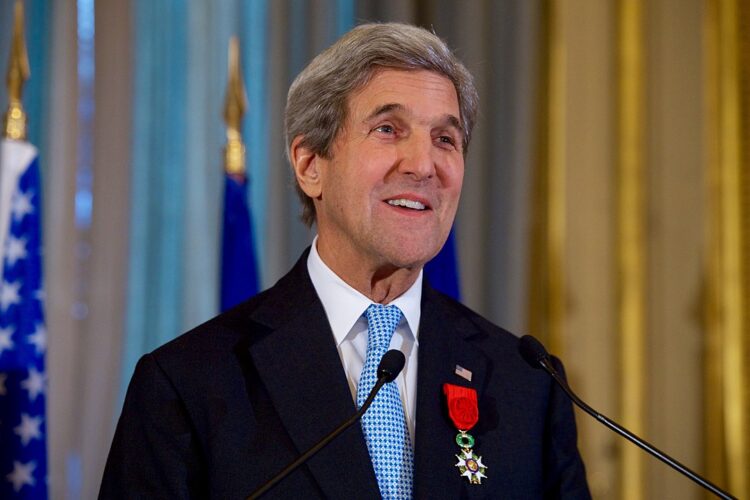 By U.S. Department of State from United States - Secretary Kerry Delivers his Thanks After French Foreign Minister Jean-Marc Ayrault Awarded him the Grand Office of the Légion d'honneur, Public Domain, https://commons.wikimedia.org/w/index.php?curid=53953951

In another shocking breach of Israel’s national security, leaked audio reveals that former US Secretary of State John Kerry revealed to high-ranking Iranian security officials that the famous “Israeli Salad” is nothing more than chopped cucumbers and tomatoes with a little bit of red onion and lemon juice.

“You know, for years I’ve been hearing about how great this ‘Israeli salad’ is,” Kerry is heard telling Iranian Foreign Minister Javad Zarif. “Then I take a 10-hour flight to Tel Aviv to try it, and it is literally just the cucumber salad from Boston Market. It has, like, two, maybe three, ingredients.”

The leak comes just days after it was revealed that Kerry told Zarif that Israel has launched more than 200 strikes against Iranian interests in Syria. But these were just two of some half dozen classified items Kerry told his Iranian counterpart, according to Israeli intelligence sources.

Kerry also revealed that Tel Aviv dog owners do not pick up after their pets, that falafel has little nutritional value to make up for its high fat content, and that most “forex” investment is little more than a scam, the source said.

“He revealed all of Israel’s deepest secrets,” the source lamented. “If Kerry and Javad continue to be in contact, I am not sure how much longer we can keep Prime Minister [Benjamin] Netanyahu’s combover classified.”