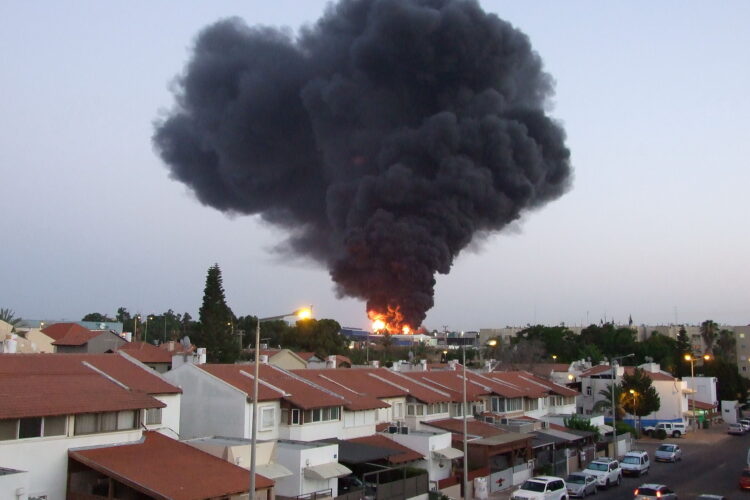 "Burning factory in Sderot, which was hit by a rocket from Gaza" By Natan Flayer (Own work) [CC BY-SA 3.0], via Wikimedia Commons

“It’s hot, and then cold, and then hot again!” exclaims Yosi Kahn, a storeowner whose business is centrally located in Tel Aviv. “We’re getting frustrated over here.”  Yosi isn’t the only citizen in the Middle East confused by the weather lately. While historical climate data mostly shows warm, yet mild temperatures throughout the region at this time of year, this spring has shown Israelis a mix of warmth, and simply unacceptable rain.

Climate Data however is a thing of the past as Hamas officials and other combatants in Gaza have long since established a new marking of weather patterns for Israelis – summer is officially announced when their warm rockets are launched and blow shit up. “Those guys are like damn fortune tellers. They shoot those fucking missiles to start off the summer, and then keep them coming daily.  Unfortunately they usually hit about 20 minutes before my alarm goes off in the morning,” a local Tel Avivian expressed in angst.

Hamas swears they will continue to control the climate until Israel meets their newest demands. “If they’re complaining about showers now, wait till we really make it rain,” a top Hamas official responded. Among their usual demands in asking Jews to ‘cool down from the river to the sea’, they’ve also put “Faster WiFi” at the top of their list. “We will not rest until Israel is destroyed, but for now we need a warp speed Internet server. It’s been three days and Mein Kampf and The Protocols of the Elders of Zion are taking way too long to download,” added an anonymous member of Hamas.

Netanyahu has declined to comment but stands by his former statement that so long as Hamas continues to behave like an annoying ex-girlfriend he can’t seem to get rid of, they will continue to be treated as such.