God Adds 11th Commandment: ‘Thou Shalt Chill the Fuck Out’ 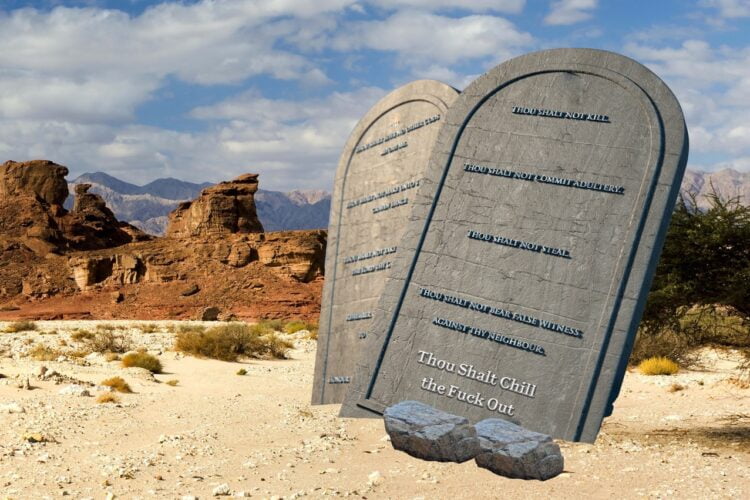 In a surprise announcement, The Almighty One, Blessed Be He, dropped his new commandment without warning this past Friday morning: “Thou Shalt Chill the Fuck Out”.

This is the first commandment that the Chief Shepherd has released in thousands of years, but he explained that it has been in the works for some time. When asked what inspired him to make an 11th commandment he pointed out that it became clear that the first Ten weren’t really cutting it anymore. “You’d think they’d get the hint with ‘thou shalt not steal’ but apparently not”.

The Lord of the Hosts admitted that he may be at fault for some of the issues facing the Middle East today pointing out, “In retrospect, I probably should have told Muhammad to use a different spot to ascend to heaven rather than the one that I had already told the Jews to build two temples on; it just seemed kind of convenient at the time. You know, like how you always end up going to the same bunch of restaurants around your office for lunch?” The Lord of Abraham, Isaac, and Jacob admitted that “Being omnipotent, I probably should have seen that one coming. My bad.”

The Creator of All Things said that he had made some efforts to fix the problem, primarily by locating the holy lands of other religions elsewhere: “Why do you think the Amish live 50 miles outside of the city where they filmed Rocky?”.