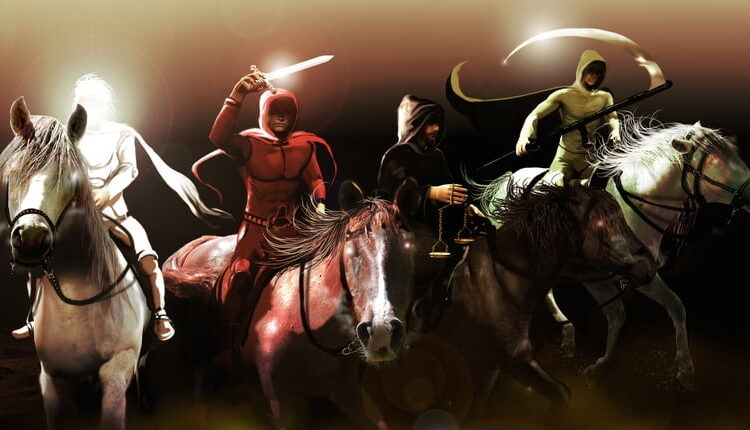 The Four Horsemen of the Apocalypse have arrived in Jerusalem this week for discussions on how exactly they are going to end mankind.

Pestilence, War, Famine, and Death have gathered in The King David Hotel and won’t be leaving until things are settled. End of the World groupie, Jim Jane commented, “The guys are just in a really good place right now and feel that now is the time to get their ducks in a row, you know before all the ducks and other waterfowl are drowned in a lake of hellfire.”

“Pestilence is all set for a banner year with Robert Kennedy Jr. chairing this new presidential commission on vaccine safety. Vaccines, who needs them? Am I right? But it’s important that we don’t forget Famine. That guy has been stalking Sub-Sahara Africa for a long while now, never does anything ‘showy’, just lets his work speak for itself.”

“And what can you say about War that hasn’t already been said? He’s just blown up lately, and with Iran ‘on notice’, China being pushed around on the Taiwan issue, and Russia being given the nod on stretching the definition of ‘national borders’, he’s all set for a long and very ‘hot’ summer of 2017.”

“Death is hard to read as he’s complaining about the insane minibar charges, going over his room with one of those UV wands, and wondering why they didn’t choose the Waldorf Astoria Jerusalem, as it got better reviews on TripAdvisor. But the guy is always working. I saw him looking at that ‘In the footsteps of Jesus’ tour group from Florida. It’s probably best if you don’t stand too close to the one with a walker.”