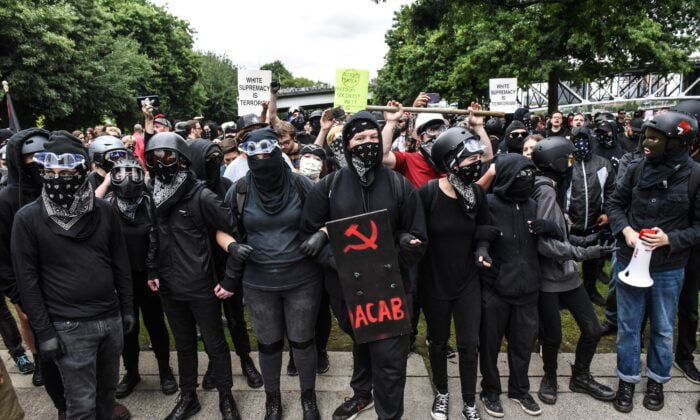 Image, Antifa in Portland, from The Epoch Times at https://bit.ly/3ncGfUq

The rioters’ seven-month siege of the city, which has focused on smashing the windows of businesses, throwing Molotov cocktails at police officers, and dumping paint on elderly women, proved too much for the global fascist movement. From Germany to Russia to the US, right wing Neo-Nazi groups announced their unconditional surrender.

“For years we have tried to resurrect the Third Reich and fulfill Hitler’s dream of world domination, mostly by posting Pepe the Frog memes on 4chan,” said Richard Spencer, the director of the white supremacist National Policy Institute. “And we would have pulled it off if not for those pesky anti-fascists and their commitment to destroying property in Portland and Seattle.”

Historians have celebrated the bravery of the rioters and lamented the fact that previous generations did not show the fortitude to strike directly at the heart of fascism.

“It is nice that American soldiers during WWII were able to stop the Nazis from taking over Europe,” said Rick Atkinson, author of a trilogy of books about WWII. “But if these soldiers had the courage to smash windows and attack journalists in liberal American cities instead of going to the beach in France, there never would have been a Holocaust.”

After learning that their fascist enemies had surrendered, the rioters unanimously agreed to end their siege of the city and went home to start families and live productive lives.