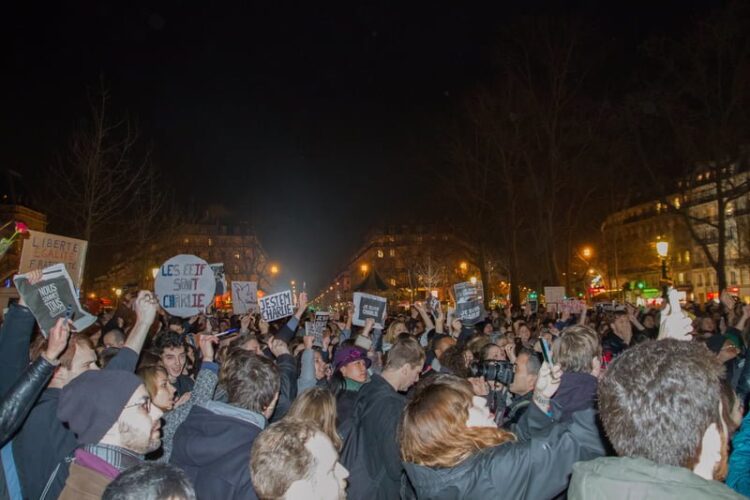 In the wake of the outpouring of grief and horror at the murders carried out against the staff of Charlie Hebdo, several ghosts of Jewish terror victims were seen marching down Paris’s Champs-Elysees. The march started quite small. “We are really pretty used to being ignored,” observed the ghost of Rabbi Jonathan Sandler as he walked hand in hand with the ghosts of his sons, Aryeh age 6 and Gabriel age 3 and their friend eight year-old Miriam all killed in the same attack.

The extremely polite protesters continued to be ignored even as their numbers swelled. Among the first to join were the four victims of last May’s attack on the Jewish Museum of Belgium. One ghost, Alexandre Strens who worked at the Museum, told TID’s Scott N. Towel that, “while I consider myself a Muslim, my mother was actually Jewish, so they said I should join. Nice folks these.” The four murdered in the Entebbe hijacking also showed up. “Sure, it was in Uganda, but we were on an Air France flight, so you know, why not?’ Did you know that the UN Secretary General at the time condemned Israel for trying to rescue us? He was a Nazi. I mean, you know a real honest to goodness Nazi. What a world.”

The protest became less polite, of course, when the Israelis showed up. Among those to join were the six murdered in Hezbollah’s 2012 bus bombing in Bulgaria. The six ghosts argued among themselves about where they should sightsee while in Paris. One did stop long enough to yell, “J’accuse” in barely passable French. Also appearing were the eleven Israeli athletes murdered in Munich. The ghost of Coach Moshe Weinberg observed wistfully, “yeah, it’s been more than 40 years and there still hasn’t been a memorial at even one of the Olympics since Munich. Doesn’t that just beat all?”

The appearance of the Israelis brought forth ghosts of Jewish terror victims killed around the world, including Buenos Aires, Istanbul, and even Israel. Holding a quick vote, the protesting ghosts elected as their grand marshals a still soggy Leon Klinghoffer and Einat Harran, who looked pretty good for having had her brains bashed in. Einat being only four, had to be carried.