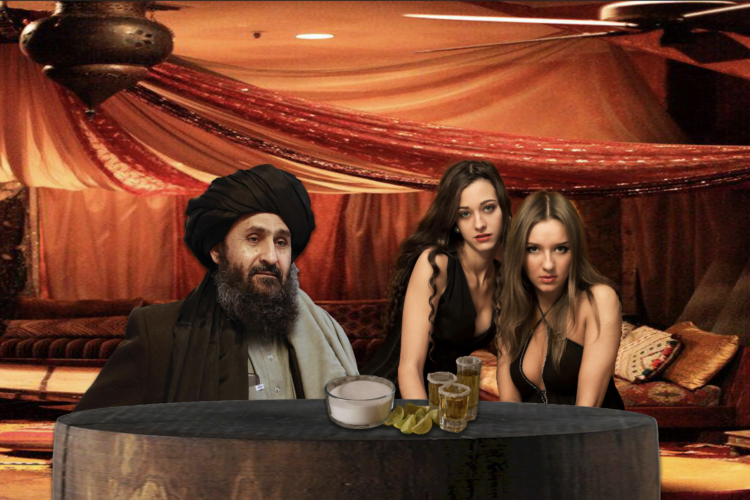 The Mideast Beast (and some other true news website)

Motivated by California Republicans’ failed effort to recall Democratic Governor Gavin Newsom, Afghans opposed to Taliban rule have launched their own recall petition to throw the Islamist group out of office.

The petition already has more than 30 million signatures, including every woman in the country.

While Taliban rule has been met with opposition since the militant group took over the country, anger reached a fever pitch after photos emerged of Taliban leader Abdul Ghani Baradar dining at an upscale Kabul restaurant, called The French Goat Testicle, with a group of unveiled girls and women. The photos drew cries of hypocrisy on the part of the strictly Islamist militants.

“I’m not allowed to show my face in public, but the Taliban can party with their unveiled female friends?” one young Afghan woman asked on Twitter. “They should have to live by the rules they enforce on others.”

Though democracy is strictly banned under Islam, Sharia Law allows does allow for the recall of Emirs under a set of sometimes confusing rules. Two questions will be put to the Afghan Ummah; the first will be whether to recall the Taliban, and the second whom to replace the group with in the event that more than 50% vote yes for the first question. A number of candidates have entered the race to replace the group, including opposition leader Ahmad Massoud, former US President George W. Bush, ISIS-K, and Vladimir Putin. But right now talk radio host Lari al-Haji leads all candidates with 7% of the vote, according to polls.