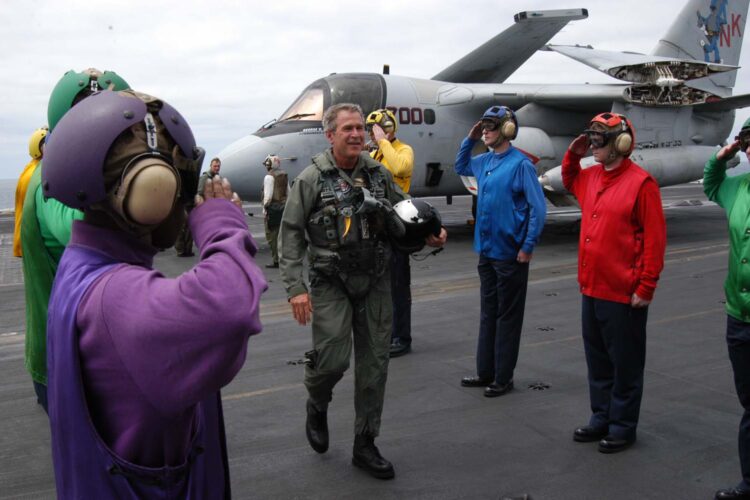 After Russian President Vladimir Putin announced an end to his country’s ‘denazification operations’ in Ukraine, despite continual bombings of civilian areas, the Russian strongman has reportedly asked former U.S. President George W. Bush to lend him the ‘Mission Accomplished’ banner Bush once displayed during a 2003 speech announcing the end of major combat operations in Iraq.

“With our mission in Ukraine pretty much fulfilled, we were looking for a bad-ass way for Mr. Putin to make the announcement that our mission there was, well, accomplished,” a spokesman for President Putin told The Mideast Beast. “Then we remembered how cool Comrade Bush looked on that aircraft carrier after he finished that whole business in Iraq. So we want to do something just like that.

Bush has reportedly agreed to lend Putin the banner in exchange for former NSA contractor Edward Snowden’s left toe. “We haven’t had to use the damn banner since Jeb’s campaign launch,” Bush noted.

Asked whether it may be too soon to declare the war in Ukraine a success, Putin’s spokesman was dismissive.

“I think we’ve pretty much wrapped things up over there (though we’re still bombing civilians for shits and giggles), and it’s all smooth sailing ahead,” the spokesman explained. “I don’t anticipate we’ll be hearing anything more about Ukraine for a long, long time.