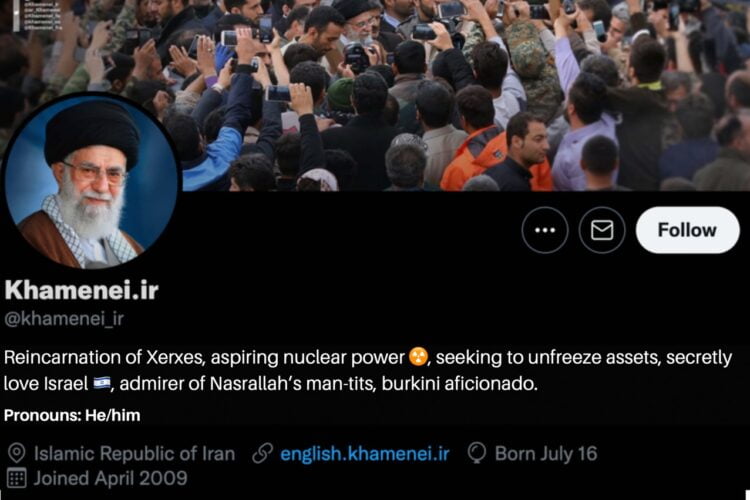 President Biden and Iranian negotiators have reached a major breakthrough in talks to curb Iran’s push towards a nuclear weapon, as Ayatollah Ali Khamenei has agreed to add his pronouns to his Twitter bio.

The agreement came after weeks of shuttle diplomacy, with Biden touting the deal as a significant step towards “peace in our time.”

“This concession by Mr. Khamenei (he/him) proves that Iran is serious about becoming a responsible actor on the world stage,” said US Secretary of State Anthony Blinken. “Frankly, we would not have been comfortable allowing the Islamic Republic to responsibly deploy nuclear weapons if its leaders were not willing to honestly and openly disclose their preferred pronouns.”

The American side was forced to back off many of its original demands. The US had initially asked the Iranian regime to amend the Quran to add the pronouns and gender identity of Allah, Muhammad and dozens of other Prophets.

In exchange for the Supreme Leader’s updated bio, the US will lift all sanctions against the regime and loosen restrictions on Iran’s nuclear development. President Biden has also agreed to convert to Shia Islam, according to a source familiar with the talks.