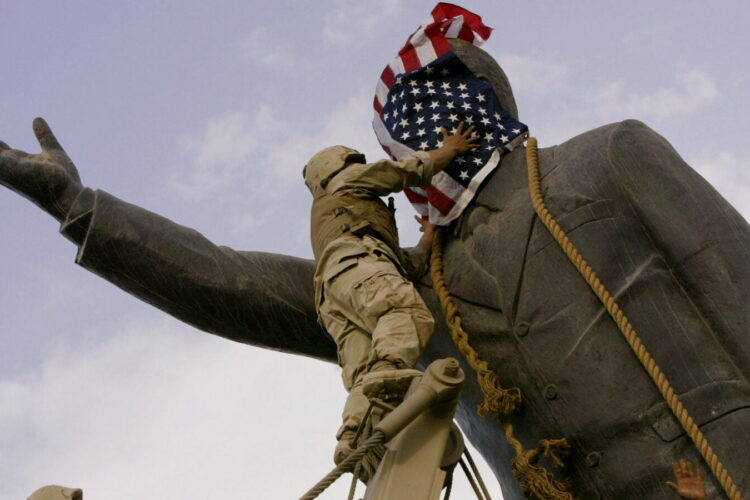 In a bid to protect his wax figure at Madame Tussauds, President Trump recently signed an executive order protecting confederate monuments. This order decreed that although these statues remind many of a reign of terror and bloodshed against their families, the statues are necessary reminders of historical truths. Real Americans, Trump says, do not topple intimate objects, which is why this week they sent troops back to Iraq to resurrect the statue of Saddam Hussein.

Assisting Iraqi civilians in tearing down the statue of Saddam Hussein was a seminal moment in the Second Gulf War. However, now that the President has signed an order protecting the deification of all murderous dictatorial rulers, it’s only right that Americans return to the scene of the crime and place Saddam back on his pedestal.

“We wanted to recreate Iraq in our image” said army commander Gigi Joe. “In 2003 that meant a democracy with a fresh start, and only a bit of election tampering and extraterritorial torture. But, we realize now how much harm we caused. We totally bombed out their history and stripped them of their culture. We insulted their autonomy and stole their sense of self. I can’t believe we had the audacity to take down that statue.”

However, when soldiers arrived in Baghdad to return the statue to its original place, they had trouble locating the exact spot due to the city “resembling something like a crater.” So, they just leaned him up against the nearest bus stop, which they figured was good enough for them to claim ‘mission accomplished’.