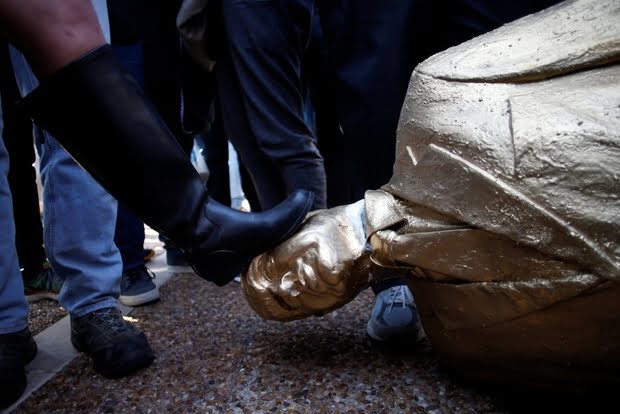 Image from "The Mideast Eye". Found at: http://bit.ly/2g7tXiu

President-elect Donald Trump’s elation over his unexpected election last month disappeared this week, after a golden statue of Israeli Prime Minister Benjamin Netanyahu appeared in Tel Aviv. Trump is furious that no similar likeness of him has appeared, and the president-elect has fired his entire transition team over this failure.

Trump initially reacted to the statue’s appearance with equanimity, tweeting, “Congrats2 @netanyahu on Gold Statue! A gr8 leeter(sic) &friend! Well deserved!” But his tone changed minutes later, as he followed with, “I could have Gold Statue if I wanted&much bigger!! But who needs it when I have Presidency&best buildings in USA?!?”

It only got worse from there. Just moments later, Trump tweeted, “Funny how I M Pres of USA and get no statue but overrated @netanyahu – PM of crappy little country – gets Gold? Fishy!” Finally, Trump announced that he would recognize a Palestinian state, cut off diplomatic relations with Israel, and move the U.S. embassy in Tel Aviv to Ramallah.

“I thought @netanyahu was a friend – Y did he try to one-up me w/ Golden Statue? Pathetic! #FreePalestine!” Trump noted in his final tweet on the subject. Netanyahu reportedly has yet to be briefed on these developments, as the prime minister has remained in his office, alone, with the statue for the past 72 hours.