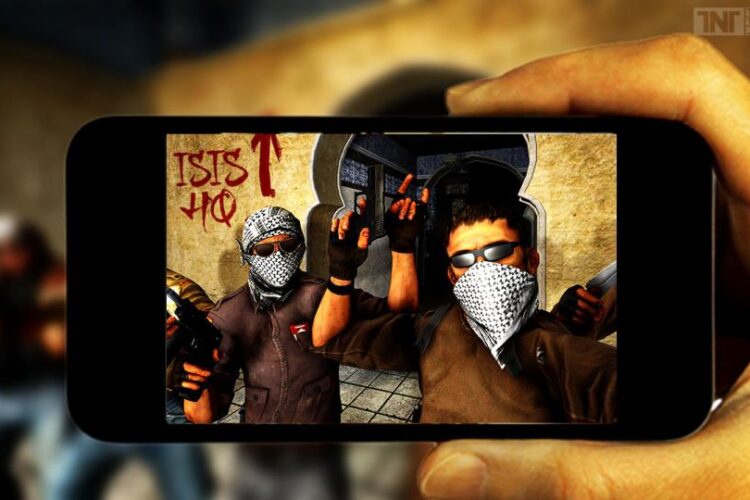 Image, property of Tech News Today. Found in "Terrorist Proves Taking Selfies In Front Of ISIS Headquarter Is Definitely Not A Good Idea" at http://bit.ly/2mvYxVO

In a move to enhance the battlefield effectiveness of its fighters, top ‘Islamic State’ commanders have had to impose a ban on ‘Battle Selfies’, which have become ever more prevalent as the terrorist group takes on increased numbers of western recruits.

One ISIS commander told The Mideast Beast (TMB), “we’ve had a real problem with this in recent weeks as we’ve looked to consolidate our position in the face of stiffened resistance from the US and its local lackeys.”

“It was great when we were on the advance and we had the luxury of time. The pictures of our Birmingham brother Mohammed smiling at his cameraphone with those Iraqi dogs fleeing in the background were brilliant for recruitment.”

But ISIS commanders say that such ‘Battle Selfies’ have now become a problem as western recruits vie to post the best selfie online. “This has become a particular issue when we are making a tactical withdrawal, as you just don’t have the time to stop and take a good selfie. If it’s not all smiles it’s no good on the recruiting front. Plus if you stop for too long there is always the chance you’re going to swallow a Hellfire from some drone,” the commander added.

The problem has become so prevalent that commanders have had to enforce a strict ban. “We don’t want to take the fun out of Jihad, and I know the Western lads in particular are excited to show holiday snaps to the chicks back home, but we do have to draw the line somewhere,” another commander explained to TMB.

“We’ve been trying to get them to join in with the local lads. They’ve always been happy with firing their weapons from the hip or up into the air. At least that way there is a chance you might accidentally hit the enemy,” he continued.

“But with these western lads that kind of analog gratification just isn’t enough. It’s got to be all digital with them – it hasn’t happened unless they can post it on Facebook,” he explained. “To be honest, the ban has also helped with reducing the costs on our group roaming data plan,” he conceded.