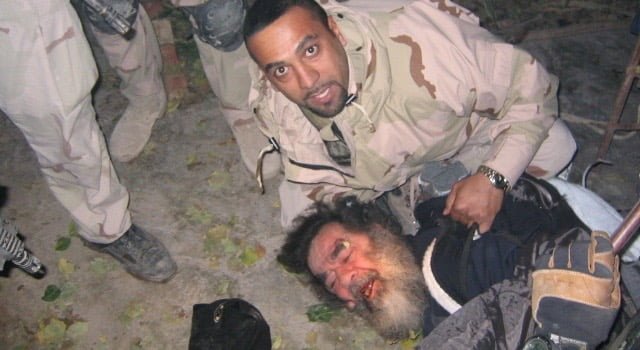 Saddam, not at his best, by G3pro at en.wikipedia (US Army photo) [Public domain], from Wikimedia Commons

Recently leaked correspondence between Saddam Hussein and his henchmen suggest that the late Iraqi dictator had a serious crush on Israel, a country he terrorized with SCUD missiles and whose enemies he publicly supported for decades.

“I wish I knew how to quit her. So petite, with that perfect, slim waist and sparkling personality. Israel is just this side of irresistible! Thanks for letting me vent, cousin. By the way, how many Kurds did we gas yesterday? I need some cheering up!” Saddam wrote in a January 1988 letter to the notorious Ali Hassan al-Majid, better known as ‘Chemical Ali’.

After Iraq launched dozens of missiles at two Israeli cities in 1991, the genocidal tyrant was inconsolable, pouring his heart out to Izzat Ibrahim al-Douri, one of Hussein’s most trusted allies and ruthless enforcers.

“What have I done! Why do we always hurt the one we love? My stepping out with the Palestinians is a sham: it plays well domestically and to international audiences. I’m living a lie,” Saddam wrote.

“You’re way up in your own head. Come, let’s go for a joyride around Baghdad and abduct some Shiites, just like old times. The fresh air will do you good,” a concerned al-Douri replied.