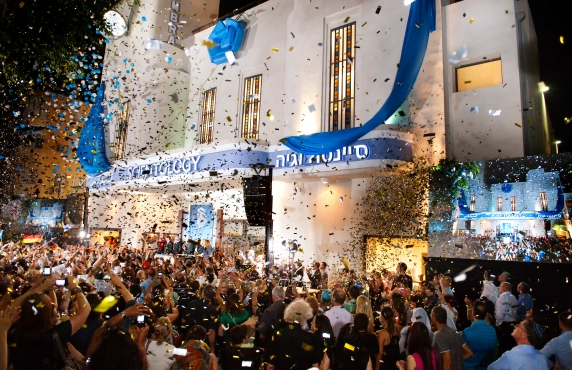 Image courtesy of (and sole property of) Scientology Center, Tel Aviv, at: http://bit.ly/1Gq118Q

The decision for early Israeli parliamentary elections follows a drunken argument at a secret, orgiastic ceremony last week. It is rumored that Tom Cruise might have presided as High Priest at the Scientology Center in Tel Aviv. A number of top Israeli politicians fought over who should first have sex with Yuvalit Abramovich, a one time transgender soap opera actor-turned Scientology volunteer, who has since been reported missing. Given that an ISIS recruitment video was found on her computer, no one can be sure what happened.

However, a government source has revealed that the Church of Scientology now has a tight grip on Israel’s Parliament, which extends to the very core of the political elite. Hagar Bornstein, Director of the center, was heard to have said to her colleagues: “Our duty is to use Dianetics, to give politicians what they want, and they in return will give us what we need. And if not, we’ll simply use the dirty little video of their actions at the party to encourage them. That’s how we roll, baby. Can I get a high five?”

David Miscavige, the “chronically short, asthma-ridden tyrant” and former “personal butt-boy” for L. Ron Hubbard, (thank you for that biographic description Urban Dictionary) is the director of the Church of Scientology who is believed to be making a concerted effort, to influence Middle East politics. Apparently, the first step is to gain control of OPEC, leading to step two: global domination. The Church of Scientology refused our repeated requests for an interview, though they did send us an invitation for a free consultation and a “$1.00 off coupon” to purchase Dianetics.