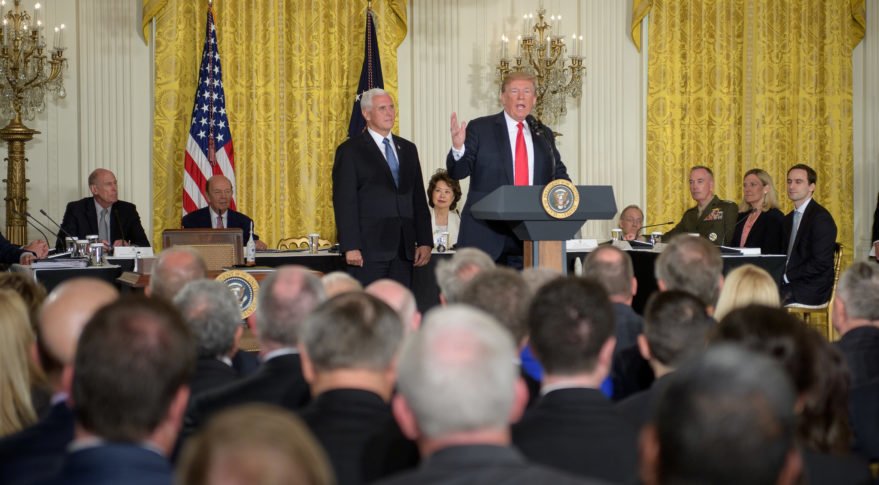 Image from SpaceNews at https://bit.ly/2N1PJ4a

After nearly two weeks, the United States Space Force has received its first mission; do something with all of the children being held by the government at the border. Today, President Donald Trump announced that he had directed his top Space Force generals, who were among the first to enlist a few days ago, to “take all those little brown kids, strap them to the inside of a rocket, and launch them deep into the furthest reaches of space.”

“The goal of the Space Force program,” Trump said Sunday, “is to demonstrate American superiority in every arena. We believe that launching thousands of little brown aliens back to their home among the stars is the best way to demonstrate both America’s military might and compassion.”

When pressed by a CNN reporter on whether he understood that the children being detained at the border were just from another country and not actual space aliens, the President immediately announced a second launch to teleport the entirety of the press corps into the nearest black hole.

Upon receiving the news, Palestinian Authority President Mahmoud Abbas said he admired President Trump’s strategy for getting rid of his problems and was looking into forming his own Space Force to “launch those filthy Zionist occupiers face-first into the Sun.”

In one of the latest viral internet stories, a recording of the word “Laurel” is heard by many as “Yanny”.  While the original recording was actually “Laurel”, the alternate version can be heard if the individual has a deficiency hearing certain frequencies, or if certain frequency information is deliberately lowered and others are intentionally increased. A number of similar phrases...

Trump Starves to Death After Restaurants Deny Him Service

Democrats retook control of all three branches of the US government over the weekend, as nearly all Republican leaders including President Trump were denied service at a number of local restaurants, and starved. The effort was spurred by the owner of a Virginia Red Hen restaurant, who turned away Trump’s press secretary Sarah Huckabee Sanders. Once enough progressive restaurant owners...

In the latest bombshell from her recently published book, former White House aide and reality TV star Omarosa Manigault claims that she witnessed President Donald Trump praying towards Mecca five times a day and sneaking out of the White House to take flying lessons. Omarosa’s claim is her most startling to date, following allegations that the president used racial slurs and...