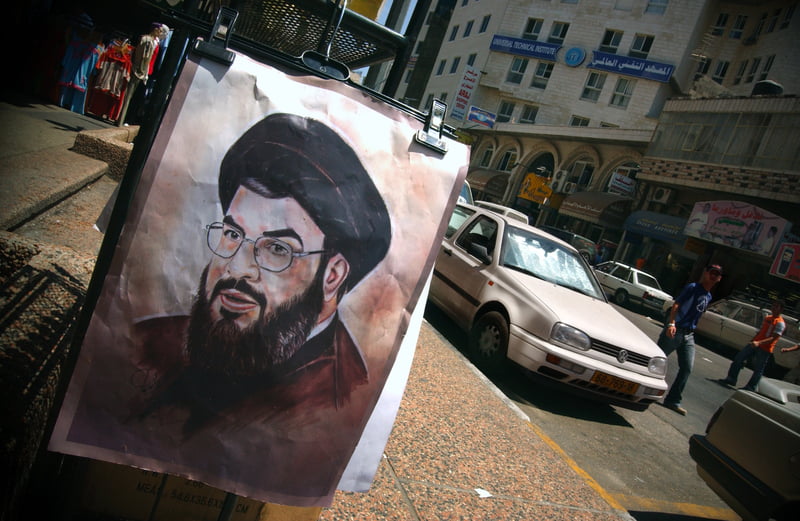 The reduction mammoplasty was performed by Swiss cosmetic surgeons clandestinely flown in to conduct the operation, according to a disgruntled member of Hezbollah’s leadership, who spoke with The Mideast Beast on condition of anonymity.

Over 30 kilograms of breast tissue were excised from his tits during the four-hour surgery, which was then fed to Nasrallah’s pet Rottweiler, Satan’s Little Helper.

The Hezbollah leader is reportedly recovering well, aided by a compression garment to accelerate the healing process and minimize swelling. Any scarring will be concealed once Nasrallah’s dense chest hair grows back after a vigorous pre-op shaving.

Despite his supremely confident public demeanor, the visibly overweight Nasrallah reportedly suffers from acute body image issues, and was finally moved to action after Zionist Twitter trolls launched a campaign mocking his sizable moobs, AKA ‘man boobs’, which included a viral image of him being simultaneously titty-fucked by Israeli soldiers.

Trump on Eid Dinner: “I’m Only Going If There’s Ketchup”

President Trump has broken a 20-year tradition by not hosting a White House Eid dinner this year. A spokesman for the president confirmed that the decision was taken after it was noted that there are no Middle Eastern dishes that can be enhanced by ketchup. “We looked at everything that was on offer and it became clear that the presidential...

A Californian vegan discovered the bloody truth about his supposed ‘Muslim friends’ when they invited him to join them in celebrating the Sacrifice Feast. Though they were aware of his vegan background, they mistakenly hoped their friendship and his belief in tolerance and equality would prevail over his vegan ideology. Dinner went smoothly until the second course when the vegan...

Iraq’s Kurdish population has decided to put its dreams of independence on hold, canceling a planned referendum after the organic grocer Whole Foods opened its first location in the country. “After learning that Iraq will soon be home to a growing number of Whole Foods Markets, we have withdrawn our bid for secession,” Kurdish President Masoud Barzani said in an...