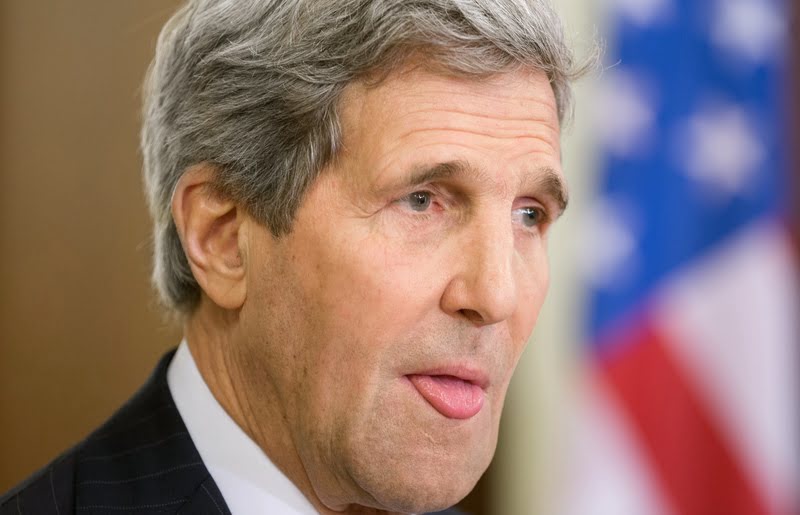 Addressing the Ebola outbreak that began in 2014, Secretary of State John Kerry blamed the spread of the disease on a lack of progress in the Israeli-Palestinian peace process.

“Talks were going fine, the disease was under control, then Israel announced that they were building these new settlements in East Jerusalem and Netanyahu announced “no Palestinian State under my watch”, and ‘poof,’ people are showing up in Dallas emergency rooms with Ebola-like symptoms. Do I really need to draw everyone a picture?” Kerry said during a press conference.

While Kerry’s claims raised eyebrows among medical professionals, it’s not the first time Kerry has linked the Israeli-Palestinian conflict to seemingly unrelated issues. Last year, Kerry claimed the conflict caused problems with the Obamacare website and, more recently, the Secretary of State has pointed to the lack of negotiations as the root of both the rise of ISIS and Ray Rice’s marital strife.

“I don’t think I have to spell out the benefits of an Israeli-Palestinian deal to anyone,” Kerry continued. “It’s clear that an agreement will put an end to the Ebola problem for good. Additionally, once this conflict is solved, ISIS will put down their scimitars and embrace secular democracy, Iran will renounce its nuclear program, and Ferguson police and protesters will come together in a warm embrace.”

While Kerry’s remarks earned praise from former American envoy to the Middle East Martin Indyk, Israel’s Economy Minister Naftali Bennett, a man who gives ‘right-wing’ a whole new level, was less enthusiastic. Bennett, who frequently interrupted Kerry’s remarks by sneaking a foghorn into the pressroom, called the linkage between the peace process and the spread of Ebola “outrageous and anti-Semitic”.

“I don’t know what kind of idiot would say Ebola and the peace process are somehow related,” Bennett said. “Only by annexing Area A of the West Bank and arresting Mahmoud Abbas can we truly put an end to Ebola.”

Kerry Touts Iranian Agreement Never to Nuke Israel on a Monday, Wednesday, or a Sunday

As proof that his negotiating acumen has succeeded in ‘serious concessions’ from Iran on behalf of Israeli security, Secretary of State John Kerry today revealed the mullahs agreement never to nuke the Jewish state on a Monday, Wednesday or Sunday. “John Kerry understands the serious security concerns of the Israeli people,” Kerry explained, as he spoke about himself in the...

LAUSANNE, Switzerland – The negotiations over Iran’s nuclear program are nearing another deadline with no resolution in sight, and yet participating leaders from both sides seem to emerge from the sessions in an uncharacteristically good mood. The Israeli Daily caught up with some of the major figures involved to ask them about the progress of the negotiations. “Some people have suggested...