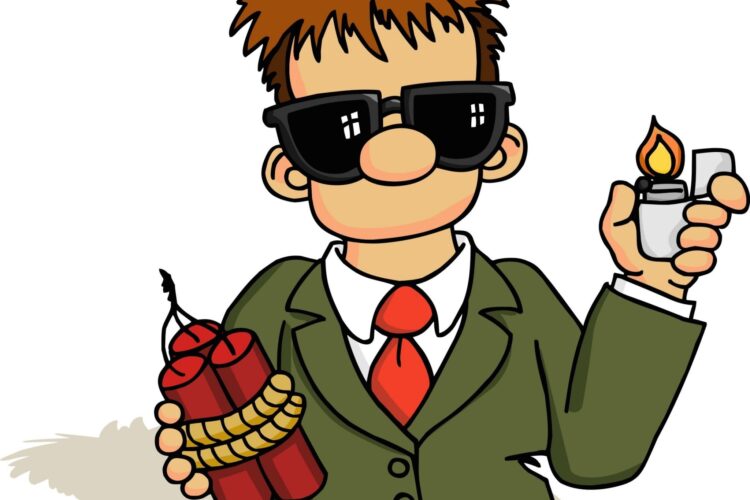 “Whatever you do, you must not push this button,” the elderly bomb-maker tells the 10-year old boy as he shows the child the suicide vest.

“This button?” the boy replies, pushing the button and separating the bomb-maker into two. Today, the death has ignited a powerful debate on the dangers of children and explosives, and whether responsible bomb makers should place their lives in the hands of irresponsible youth.

Hamas master bomb-maker Hous bin-Pharteen enjoyed working with Palestinian children. “They are too stupid to know how dangerous the explosives can be. This makes them the ideal suicide bombers.”

M’Balz Es-Hari, who supervises the assembly of suicide vests for Hamas, told The Israeli Daily that the boy’s parents had signed the necessary waivers and were present to observe their son’s final glory. “Of course they were upset, very disappointed. We reward the families of our martyrs well. They were a poor family are were eager to receive their loaf of bread.”

The boy’s father was quick to blame Israel for bin Pharteen’s untimely death. “This was obviously a Zionist plot. They allow our protectors to liberate poorly-made explosives into our settlements, putting us all in danger,” said Haid d’Salaami. “Death to Israel!!”

This isn’t the first such incident. Earlier this year, an 8-year old girl prematurely detonated an explosives-laden donkey, while a 12-year old boy accidentally triggered a chain detonation of suicide bombers preparing to enter Israel from an underground tunnel network.

“You cannot put explosives in the hands of a child and expect them to control them,” remarked Es-Hari. “From now on, we will only attach explosives to the children, not allow them to handle them.”

The boy, Waak d’Salaami, was visibly upset. “I will always wonder if my virgins would have been pretty.” The boy’s father reminded him that nowhere in the Quran does it say the virgins are female.

Sauron Relinquishes “The One Ring” to ISIS

Sauron, Ruler of Mordor and oppressor of the free peoples of Middle Earth has relinquished ‘The One Ring’ to ISIS this past week “because let’s be honest, they are doing a much better job than I am.” While Sauron has done little to further his goals of irrevocable hatred and genocidal totalitarianism, ISIS has excelled in reaching both those goals....

Hamas has agreed to allow gays to serve as suicide bombers as part of an overall campaign to liberalize the Gaza Strip. Ahmed al-Tabi, Hamas’ cultural minister promised that “a future of equality is in store for Palestinians” and that “the Zionist entity does not have a monopoly on progressive policies. And by the way, they’re still way, way behind...

It has been predicted in the past that as brutal as Middle Eastern conflicts have been in the past, they will become more gruesome when the focus of wars shift from faith or territory to water. Water, also known as that thing that you are mainly comprised of, is the chicken broth in which the matzah balls of life exist. For...